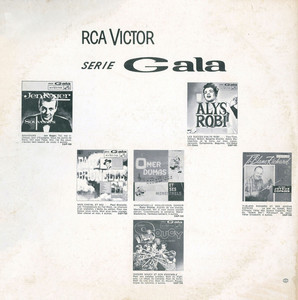 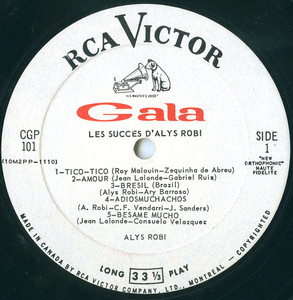 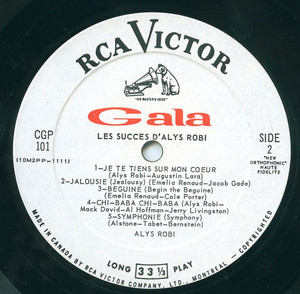 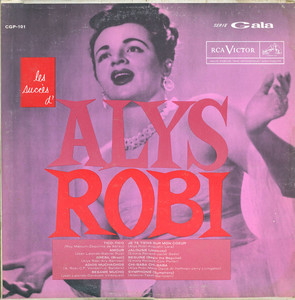 Alys Robi was known as Canada's answer to Carmen Miranda.

Long before Céline Dion there was Alys Robi.

Robi was Quebec's first high-voltage international recording star, whose promising show business career was cut short in 1952 when she was sent to a mental institution for five years and lobotomized following a car accident in California. Often described as Canada's answer to the renowned Latin singer and dancer, Carmen Miranda, Robi's renditions of Tico Tico, Besame Mucho and You Belong to My Heart sold hundreds of thousands of copies during the Second World War.

Her life story was the subject of a 2004 movie, Ma Vie en Cinemascope starring Pascale Bussières, a 1996 television biopic with pop music star Isabelle Boulay in the title role. Robi was also featured on CBC's Life and Times, and Luc Plamondon wrote a song about her.

She was 88 when she died of a respiratory ailment hours after being admitted to Montreal's Maisonneuve-Rosemont Hospital on May 27.

An alluring, temperamental woman with magnetic eyes, Robi was as well known for her tumultuous love affairs as she was for her singing.

"I've had many beautiful romantic love affairs in my life," she once told an interviewer. "Unfortunately, the men I had them with weren't very nice. But I have no regrets. My greatest love affair has always been with show business. It's a tremendous life! You get to meet all kinds of people, to understand life. And I think you get to become very human, very tolerant."

Alys Robitaille, the daughter of a semi-professional boxer and volunteer firefighter was born in Quebec City on Feb 13, 1923, one of eight children in the family. She made her stage debut at the age of 4 as La petite Alice, singing in a vaudeville show at the Capitol Theatre. When she was 12, she set off on her own for Montreal, where she worked with the celebrated comedienne Rose Ouellette. By 1939 she was a popular vamp, a cabaret singer with her own French-language radio show.

The first love of her life was Olivier Guimond, the father of stand-up comedy in Quebec. But to further her career she left Guimond for Lucio Agostini, the Toronto musician who was then conducting the orchestra for a Montreal radio station's variety show. Agostini changed her name to Robi and steered her into a recording contract with RCA Victor. In 1948, she was to star in a Hollywood movie, but her breakup with Agostini and a car accident left her with mood swings.

"It was very hard in those days to get to the top of the world when you came from Quebec. Quebec was an unknown place. The only roles you got in Hollywood if you were from Quebec was playing Amerindians in the movies," she said.

She was institutionalized. In part, because of the stigma of mental illness, her attempt at a comeback failed. "In those days if you were mentally ill, they locked you up until you died, then they buried you in unconsecrated ground out behind the asylum," she wrote. A gusty woman, Robi returned to the stage and found a following as a parody of herself in gay bars. It wasn't until the mid-70s, after her memoir Un Long Cri dans la Nuit was published, that she regained a measure of her lost celebrity.

"Alys Robi was one of my idols," said Denise Filiatrault, who directed the 2004 biopic. "She was the Céline Dion of my generation."

Robi was made a grand dame of the Royal Order of Malta in 1985 in recognition of her work with post-psychiatric patients. Eight years ago she appeared at the gala re-opening of Quebec City's refurbished Capitol Theatre when she was 80 years old and brought down the house with her signature tune, Laissez moi chantez encore. "There are many bad, degrading things about being an artist," she said at the time. " I did some bad things, too - I'm no angel. But I always had faith in God inside of me. Sometimes I ignored it, but in the end I survived because of my faith."