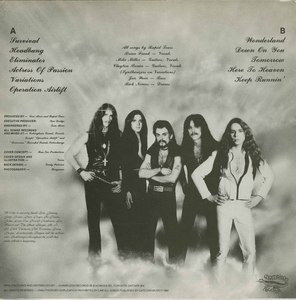 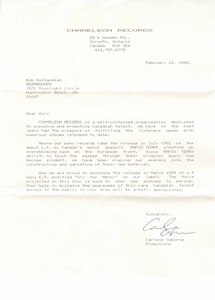 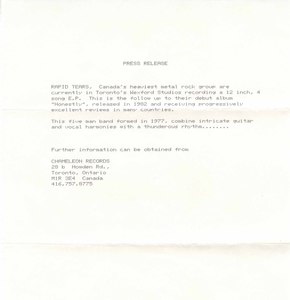 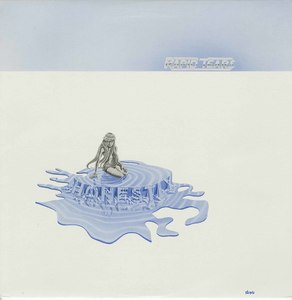 The album was produced by Tom Atom and Rapid Tears. Executive producer was Ken Doidge. Engineered by Tom Atom. All songs recorded and mixed at Cottingham Sound, Toronto, Ontario, except 'Operation Airlift' and 'Tomorrow', which were recorded at Sounds Interchange in 1980. All tracks mixed at Sound Kitchen in 1982. Cover concept by Raw Ear Productions. Cover design and illustration by Verne. Back design by Cindy Putman. Photography: Benjamin.

The tracks are: Survival/ Headbang/ Eliminator/ Actress of Passion/ Variations/ Operation Airlift // Wonderland/ Down on You/ Tomorrow/ Here to Heaven/ Keep Runnin'.

The fantasy cover artwork (by Verne Andru) sells for $200, whereas the other cover can often be found for about half that.

Chameleon Records was a small independant label that was operated by Carlene Osborne, at 28b Howden Rd, in Toronto, Ontario. They were a self-contained organization dedicated to exposing and promoting Canadian talent. Besides the 2 Rapid Tears releases, they also released Honey Novick and Chris Henderson on WRC1-930; Honey Novick and Friends-Fortune Baby on CR-777; Music for Subways: Toronto's subway musicians in the studio on OM-233; The Circuit-ST LP on CR-555; Neon 7" on CR0757; Instructions 7" on CR-355; Cold War 7" on CR-532; and No Pedestrians comp LP on CR-535; Pale Blue 7" on CR 001.

Both albums wre re-issued on on CD in 2006 privately on Rapidt 001.
-Robert Williston