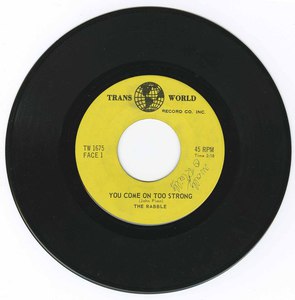 The Rabble got their start in 1966 when guitarist Mike Harris teamed up with singer John Pimm and bass player Tim Charbonneau in Pointe Claire over on Montreal's west island. However, despite releasing two full-length records, a quirky self-titled debut and its more straight-up successor Give Us Back Elaine!, wowing 5,000 restless Cream fans at Montreal's Paul Sauve Arena when Clapton and Company failed to show, and getting on the bill at the infamous Queen's Park Love-in in the spring of 1967, the Rabble have been strangely excised from much of the Canuckrock history books. As Harris recalls, "We played at Queen's Park in Toronto. That was a big event, with major acts like (Leonard) Cohen and (Buffy) St. Marie, and it was covered on TV news, although now you'd never know it happened. That show has been pretty much airbrushed out of the official history for some reason."

After their first single, the oddly titled psych rocker 'I'm Alaboundy Bam', failed to see much chart action, the three along with drummer Brian Robillard set out to record what would become one of the great lost singles of the 1960s...in any country. Once inside the studio, the four wasted little time, and Pimm's fetching ode to romantic love, 'Golden Girl', was ready in a matter of minutes. "In the half-day session we actually spent 28 minutes in total recording both sides of the single, 14 minutes on the live instrumental beds, and 14 minutes overdubbing the vocals. The rest of the session was spent miking the drums, adjusting levels, etc. And that was our biggest single!"

Though originally the b-side to the punchy rocker 'You Come On Too Strong', the song was a mainstay on the airwaves during Montreal's event-fuelled summer of '67. Unlike a lot of the hormone-laced garage rock at the time, 'Golden Girl' somehow managed to capture adolescent stirrings of a more soulful nature, a kind of young adult's quest for a kindred spirit that located its energies somewhere between the gut and the solar plexus, and a marked contrast to the pelvic swagger of the Stones and their disciples of the day. While Mick was looking for someone to spend the night with, Pimm's golden girl was "someone I can walk with and someone I can talk with".

'Golden Girl''s lithe guitar riffs might suggest otherwise, but the Rabble were freaks at heart. Regular gigs at Gary Eisenkraft's Penelope club, which had also hosted the Fugs and the Mothers of Invention, probably helped solidify that reputation. Then the band made a series of unwise choices that, in hindsight, probably hastened their demise. As Harris tells it, "After 'Golden Girl' we got very avant garde. Once we got Walter Reilly as replacement drummer, we left the song off the first album because he wasn't on it. So we re-recorded it, and were going to put it on Give Us Back Elaine!, but then Trans-World got the deal to release the first album in the US, and they put 'Golden Girl' and 'Laughing' on that version."

The Rabble released their final single in 1970, ironically an organ-flecked version of the Stones' 'Time is on My Side'. Which of course was not the case at all. "That was THE song that was specifically rejected by the MAPL system, probably because it was too funky, or maybe we were blacklisted for singing, 'Oh Canada, our home and native town'." Unfortunately, the band's slide was by then all but complete, and not long after, one of Canada's most original and overlooked bands had quietly slipped into the nether reaches of rock obscurity.
-Michael Panontin
visit Michael's site here: http://www.canuckistanmusic.com/index.php?maid=303