Formed in 1965, The Rabble were a psychedelic/garage act that hailed, originally from Pointe-Claire, Quebec on Montreal’s west island.

Their first single was the Mike Harris written “I’m Alaboundy Bam” released in 1966.

With no substantial support from RCA, and a failing debut single, the band recorded their next single, “Golden Girl”, in December 1966 which saw release in the summer of 1967 on Trans-World Records. Wynne replaced Brian Roberts in The Haunted. In turn, Roberts joined the Rabble.

Prior to the band’s self-titled debut album being recorded and released in 1967 on Trans-World Records, founding member and co-writer Rick Metcalfe left the group. The album was produced by CFOX (Pointe-Claire) radio personality Dean Hagopian.

On May 22, 1967 the band performed with The Isabella Blues Band, Leonard Cohen, and Buffy Sainte-Marie at the Queen’s Park “Love In” in Toronto which was attended by nearly 4,000 people.

Drummer Roberts was replaced by Teddy McMahon. The Rabble performed at Expo ’67′s Garden Of The Stars Pavilion.

The band’s follow-up effort, ‘Give Us Back Elaine’, was recorded through the end of 1967 into early 1968 and released in 1968 on Trans-World. By this time the band had played The New Penelope Coffee House and throughout Greater Montreal, Quebec City, Ottawa, Toronto, Kingston, as well as touring northern Ontario. In April of 1968 The Rabble substituted for Cream, who had canceled at the last minute, at The Paul Sauve Arena in Montreal to 5,000 fans. Despite the band’s unrehearsed show, they impressed the crowd with an hour-long set of songs consisting of their singles and album material.

Following this impressive show, promoter Donald K. Donald had to turn down engagements on their behalf because they were already booked on a tour of one-niters throughout Quebec and Ontario.

They soon secured a recording deal with Roulette Records in the US and toured California in 1968 to ‘underground’ music fans.

In May of 1968 the band was double-billed with the Guess Who in a ‘Wildest Pair’ tour at places such as the Loyola Arena and the Dorval Recreation Association. The group lasted through 1970 having released a final single on the Aquarius label.

Rick Metcalfe formed a band called Aeon with Al Birmingham in 1976; Pimm moved to Toronto and worked with Lighthouse’s Bob McBride and then Deja Vu and John Moran. He also did studio session work as guitarist. With a relocation to British Columbia, Pimm has been producing music at Canadian Concept Studios in Victoria, BC., and has played in Hawaii (5 times), Bangkok, Palm Springs, CA. He has recorded two Jazz instrumental albums and is working on a third one; David Wynne now works in Singapore.

Rising of the Sun b/w Too Bad 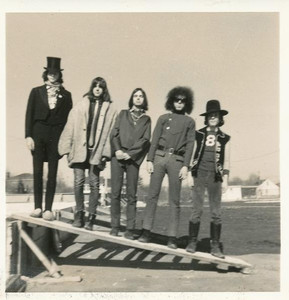