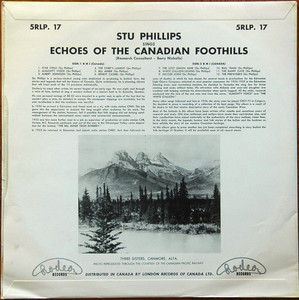 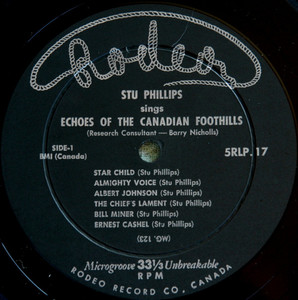 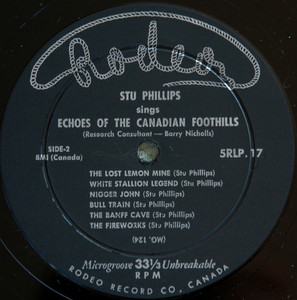 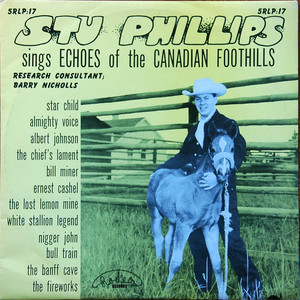 Phillips, Stu (Stuart). Country singer (baritone), songwriter, broadcaster, b St-Eustache, near Montréal, 19 Jan 1933. Known as 'The Travelling Balladeer,' Phillips sang as a youth on amateur radio shows in Montréal (CJAD and CFCF) and Verdun (CKVL) and at 16 worked his way west, appearing at rodeos and carnivals. He wrote many ballads based on Canadian history, including 'The Champlain and St Lawrence Line' and 'Dollard des Ormeaux.' Some were later heard on the LP Stu Phillips Sings Echoes of the Canadian Foothills (Rodeo 5-RLP-17) and were among 13 songs in a folio published by BMI Canada in 1963. Other Phillips folk recordings from this period appeared under Rodeo's Banff and Canadian Cavalcade labels.

In 1980 Phillips issued a Canadian LP, Born to Be a Man (CTL CTLS-5228/Pickwick PC-66003); and in the 1990s released further recordings including Don't Give Up On Me (Broadland 1293) and A Journey Through the Provinces, a compilation of early songs and previously recorded material (BCD 15721 AH). In 1993 he was inducted into the Canadian Country Music Hall of Fame and in 2002 became a member of the hall of fame of the North America Country Music Associations, International (NACMAI). Phillips continues to perform in the Nashville area, where he owns and operates a winery.

Montréal native Stu Phillips grew up in Calgary, Alberta, in the foothills of the Canadian Rockies, writing many of his early songs there. He grew up listening to the Grand Ole Opry on a small crystal radio set and fell in love with the show and country music in general.

Lately, his music, including the single “Only God,” has been found on the Christian country charts. Stu Phillips still tours and performs on the Opry, although he has also become a minister in the Episcopal Church, receiving his divinity degree from the University of the South in Sewanee, Tennessee.
-Richard Green, Sarah Church