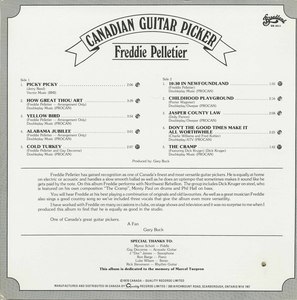 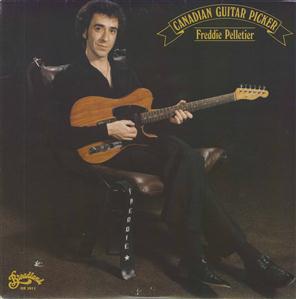 Fred Pelletier has gained recognition as one of Canada's finest and most versatile guitar pickers. He is equally at home on electric or acoustic and handles a slow smooth ballad as well as he does an uptempo that sometimes makes it sound like he gets paid by the note. On this album Freddie performs with Northwest Rebellion. The group includes Dick Kruger on steel, who is featured on his own composition "The Cramp", Monty Paul on drums and Phil Hall on bass.

You will hear Freddie at his best playing a combination of originals and old favourites. As well as a great musician Freddie also sings a good country song so we've included three vocals that give the album even more versatility.

I have worked with Freddie on many occasions in clubs, on stage shows and television and it was no surprise to me when I produced this album to find that he is equally as good in the studio.

One of Canada's great guitar pickers.
-A Fan
-Gary Buck

The album was dedicated to the memory of Marcel Turgeon

I just discovered the Museum of Canadian music tonight, when I was searching for info on Myron Schott, who my husband Luke Wilson used to play with a bit.
So and behold, google found a entry for Myron on MOC, playing with Freddie Pelletier, who Luke also did some playing with--and there is Luke listed as the banjo player. So I thought I would write and tell you about Luke, whose long musical career began in his home province of Ontario in 1965, with the folk band the Parkwood Minstrels.

It was fun to find the MOC site, as Luke doesn't recall doing the recording with Freddie! But he recorded with so many many artists while living in Calgary from 1976-1985, it's no wonder he might not recall all of them. He was the go-to guy for mandolin, 5-string banjo, dobro, and lap-steel playing, and played on many recordings, and was hired to play on many commercials.

Luke's day job in Calgary was as a luthier and he ran Player's Custom Guitars on 10th St NW.

He played in many bands, including Backline Orchestra and with Diamond Joe White His own bands included High in the Saddle, and Buckdancer's Choice, with Richard Gullison and Camilla de Crespigny on guitars and vocals. Then he started Lost in the Colonies, which I eventually joined. For a number of years, Luke, along with Ron Casat, was one of the official "sidemen" at the Edmonton Folk Festival, as he was a great improviser, and sat in with all kinds of artists at that festival.

A veritable cornucopia of musicians played in Lost in the Colonies over those years, including keyboardists Ron Casat and Miles Jackson, bassists Bill Eaglesham and Phil Hall, percussionists Ray McAndrew and Jack Hiles, mandolinist Rodney Brent, slide guitarist Byron Olsen, guitarists Peter Marley and Gary Byrd, flutist Scott Sheerin, and the aforementioned Myron Schott on violin. Lost in the Colonies played many festivals, including Edmonton, Calgary, and North Country Fair (a few times each) and many folk clubs in Calgary, amassing a wonderful bunch of fans in the process before we had to move to Northern California in 1985 to help with my ailing mother.

Lost in the Colonies recorded our one and only cassette at CBC studios in 1983/'84, with the wonderful Don Pennington engineering. A few years ago we remastered to CD, but never got around to re-releasing it as such.

Luke and I have continued to play music here in California, and the past six years we've been very busy with our current band, Beaucoup Chapeaux. Luke is also still working as a luthier right here at our home near Nevada City, CA.