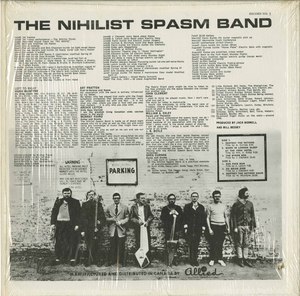 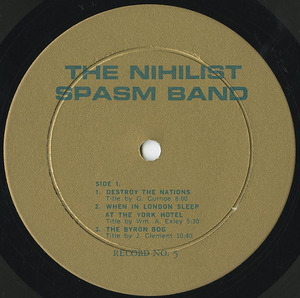 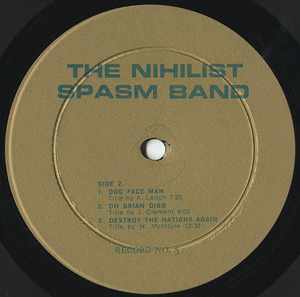 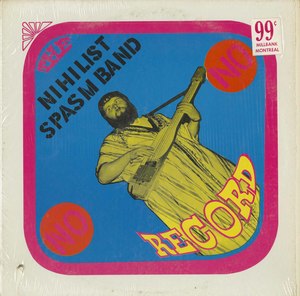 This is the short story.
The NSB was formed in 1965 by a group of people who enjoyed music and wanted to play in a band. There was no desire to learn to play traditional instruments so kazoos were bought and assorted noise makers modified or built from scratch. The band started playing regularly every Monday night in 1966 and has just carried on .The personal has stayed the same. John Boyle (artist) kazoo and drums, John Clement (MD) guitar and drums, Bill Exley (geezer/latinist) vocals, Murray Favro (artist) guitar, and Art Pratten (pensioner/gentleman of leisure) Pratt-a-various and Waterpipe and Aya Ohnishi (permanent guest artist) kazoo and drums.

The band currently plays most every Monday night at Forest City Gallery in London Ontario Canada. The atmosphere is informal. We play for our own enjoyment but an audience is welcome.

This is the long story (from the liner notes to Vol. 2)
The Nihilist Spasm Band is unique. In the original meaning of that work, which is one of a kind. We know of no other band like the Spasm Band. How is it unique? There are two interrelated factors. Our music is completely freely improvised and we make our own instruments. Perhaps that does not sound so unusual; further explanation is required.

Of course, many others improvise, but they are generally improvising on standard chords, modes, and scales. Even those who improvise, "completely freely" are trained musicians who are consciously breaking the rules and forcing unconventional sounds out of traditional instruments. No member of the Spasm Band plays a traditional instrument either in the band or anywhere else. In other words, even if we wanted to play Melancholy Baby, we couldn't.

Building our own instruments is closely linked to total free improvisation. The instruments are designed to fit into our band and not to be tuned to any scale. Nor are they tuned to each other. Each instrument is "tuned only to itself". The only requirement for a Spasm Band instrument is that it be completely flexible. For example, a piano produces the same not every time the same key is struck. This is no good for it imposes a scale. On the other hand, a fretless stringed instrument can produce absolutely any tone within its range, as well as glisses.

The instruments:
One of the "guitars" on this album has frets but no fingerboard. Thus the notes can be varied or bent by varying the pressure applied between the frets. The second "guitar" is usually played with a slide (a test-tube).

The "violin" is played with a conventional bow. It is solid-body and has two mental strings.

The electric "bass" (guitar-type) has no frets and 3 1/2 strings, 1 1/2 piano strings and two electric bass strings. The 1/2 string is played like the fifth string on a banjo. The kazoo, of course is as flexible as the human voice. We are the inventors of the giant electric kazoo.

To use large horns to increase the natural simplification of the kazoo was an obvious step, but electrification proved tricky because of feedback problems. An electrical engineer friend rewired hearing aid ear-pieces to produce small microphones which were inserted right into the tube of the kazoo. Et voil , the giant electric kazoo. One of the kazoos is frequently played with a Cornet mouthpiece.

Our electronic instrument, the theremin, produces a single pure electronic tone which can be infinitely varied both in pitch and volume depending on the position of the player's hands in relation to the antennae of the instrument. The instrument is never actually touched. Under the hands of our vocalist this one-note-at-a-time melody instrument frequently turns into a very effective rhythm instrument. The drums are the most conventional of our instruments. The set looks odd because it is a hodgepodge collected over years, but each individual part is fairly conventional. we do make our own drum sticks. We switch drummers, usually after every number. Originally this started because two members both wanted to play drums, but it turned out to be a good idea. Playing drums for the Nihilist Spasm Band demands a very high level of energy output. Few people can keep this up for very long. Both drummers double on other instruments. Thus, on some numbers there are one kazoo and two "guitars", on the others two kazoos and one "guitar".

It should be mentioned that the instruments are slowly but constantly changing. Each band member is now playing his fourth or fifth instrument. It takes a couple of years to fully explore the potential of a newly-build successful instrument. Of course, there have been failures which were quickly discarded. But the member eventually became discontented even with very successfully instruments.

Of the two "guitars" on this album, one was built only a few months before the concert and the other has since been replaced by a brand-new revolutionary all-metal "guitar" (see cover). Members generally build the instrument that they play, but the more manually skilled help those who are less so and a few problems have required outside help.

All of the instruments are electronically amplified (except the drums). The Nihilist Spasm Band is LOUD. This record should be played at high volume level.

Now, if seven people whose instruments are not even turned to a common scale start playing together without even a predetermined musical grammar surely the result must be sheer chaos?

Well, occasionally, but perhaps surprisingly, very seldom. The answer is that we play together. Of crucial importance is the fact that the seven members playing on this record are the same seven people who founded the band in London, Ontario thirteen years ago. At first we had problems. Everybody tended to play at once, independently Chaos. We discussed taking solos in turn, but never worked. And it turned out not to be necessary. We soon learned to play together. Now solos (or duets), accompanied or unaccompanied, just occur. We learned to leave each other room, to lay out or lay back.

After all, when you eliminate the scale, the key, the repertoire, the category (not jazz, nor rock, nor folk...), the traditional rules, and even the breaking of the rules, what is left? We can only rely on each other. You have to learn to play together or quit and we have kept going for thirteen years. We play for, to, and off each other. One person starts something; a figure, a fragment of common melody, a regular beat. Others pick it up, change it, accompany it, sometimes, even oppose it. Whatever form it takes we react to what he started. Imitation is very important. Sometimes, listening to tapes afterwards, even we cannot tell who was playing what, even when different sorts of instruments are involved (say "violin" and "guitar"), so successful have we become at imitating each other.

This almost total reliance upon interaction among each other generates a paradox. The audience is both totally irrelevant and very influential at the same time. For thirteen years we have performed publicly in London, Ontario every monday night. In that time we have had large audiences, small audiences (usually), and sometimes no audience at all. Now you cannot rehearse totally improvised music. Every time you play, you are performing. And when we play without an audience, the performance is very much the same. the result shows that we certainly do not need an audience at all. On the other hand, if you are open and sensitive to the other band members so that you can respond to them, you cannot help but be sensitive, to a lesser degree admittedly, to anyone else present. Hence we react to the audiences as well as to each other. We have been accused of venting our hostility on the audience. But we do not need an audience to play.

What happens is that the band reacts to the hostility of an unsympathetic audience.

When the hostility of an audience is reflected back at them many times magnified by our amplifiers, the effect can be very disturbing. On the other hand, a sympathetic audience can give the band a real lift.

One very small exception to our total improvisation approach is the vocal lyric. The words are almost always written down in advance, and the vocal is almost always performed at the beginning of a number. Stupidity (A2), which is a favourite conversational theme of our vocalist, is typical. The words were written down on the back of the traditional old envelope in a restaurant several hours before the concert. All band members contributed to this lyric. Of course these are just words on a piece of paper. What the vocalist is going to do with these words and how the band is going to react to what he does, no one knows in advance.

The ultimate question is why do we do it? After all, most people do not like our music at all. First, some information about the members. The average age of the band is almost forty. Even Thirteen years ago we were not "a bunch of kids". Each member of the band has his own separate career, and with one exception, each member is married with children. Further, each member is better known and more successful in his own career than the band as a whole is. So we do not do it for either fame or notoriety. We are not famous and never will be. The band is important to us but not the most important thing in our lives. Everyone puts his own career and family far ahead in priority. Certainly not for the money. No one have been counting, but we almost certainly have not broken even financially. Because we think we are creating great art? We don't. It probably is music, because music is a very big word, but if you think it isn't, that's all right too. Maybe we feel we are the cutting edge of the wave of the future? Actually, we are very ambivalent about the wave of the future. Imitation may be flattery, but it is also sorta nice being unique. So there is no great message, no avant-garde crusade.

Why do we do it? No fame or fortune, nor in service of some artistic theory, nor to please or offend an audience. We do it because we enjoy it. Audiences are nice, frequently stimulating, but ultimately we play for ourselves, because it is fun. Is that all? Almost, but not quite. Sometimes everything seems to fall together into place. The band really starts to cook, to groove, to swing, to drive (words fail). When that happens there is a real rush, a genuine feeling of exhilaration. many bands need to get high to play well. We need to play well to get high. It is this "high" that takes it a bit beyond just fun, just another hobby.

This album consists of portions of a concert recorded live at the Music gallery in 'Toronto on February 4 1978. The concert was reviewed by Adele Freedman for the Globe and Mail. Here are few quotes taken from that review, "the most unimaginable howl of terrifying beauty.. The unrelenting intensity of the Nihilist's sonic napalm...Yet it was funny too. Yes, it was all very funny...Mercilessly strong." Her most interesting comment did not appear in the review. When asked how she liked it. Adele Freedman replied "Somehow, I feel compelled to like it." Most importantly, we liked it. It was a good concert. We hope you will somehow feel compelled to like it too.
-Arnaud Riviere and Hugh McIntyre