The NSB was formed in 1965 by a group of people who enjoyed music and wanted to play in a band. There was no desire to learn to play traditional instruments so kazoos were bought and assorted noise makers modified or built from scratch. The band started playing regularly every Monday night in 1966 and has just carried on .The personal has stayed the same. John Boyle (artist) kazoo and drums, John Clement (MD) guitar and drums, Bill Exley (geezer/latinist) vocals, Murray Favro (artist) guitar and Art Pratten (pensioner/gentleman of leisure) Pratt-a-various and Waterpipe. Greg Curnoe (deceased), Hugh McIntyre (deceased) and Archie Leitch (permanently retired) play less often.

The band currently plays most every Monday night at The Forest City Gallery, 258 Richmond St. just south of under pass in London, Ontario, Canada. The atmosphere is informal. We play for our own enjoyment but an audience is welcome.

The first book about journalism I ever read explained the meaning of two key words, "wonderful" and "legendary," as used by feature writers and press agents. Both definitions involve longevity and repetition. If, for instance, an old lady walks down to the post office to get her mail at 11 one morning, that is unremarkable. But if she does the same thing at the same time every day for 30 years, then she automatically qualifies as "wonderful." If a man makes a chalk drawing on a busy sidewalk, it's not worth mentioning. But if the same person makes the same drawing every Saturday morning for 30 years, then he can be -- in fact, by all the laws of journalism he must be -- described as "legendary."

The author of that long-ago book on newspaper writing was taking a sardonic view of our profession, but he was right. That was reaffirmed for me this week when I read a press release applying the term "legendary" to the Nihilist Spasm Band, a group of half a dozen amateur performers in London, Ont. Every Monday night, at the Forest City Gallery, they collectively make sounds. These sounds (produced with kazoos, drums, homemade guitars, ball bearings in a pot, etc.) have no discernible value or meaning; by comparison, an often baffling composer like John Cage is as clear as Handel, and Arnold Schoenberg as sweet as Richard Rodgers. These performances are music with keys, chords, tunes and rhythm omitted. They are, however, loud. Several members of the band wear ear plugs while "playing." One of them has nevertheless grown quite deaf and is often mistakenly thought to be surly because he frequently doesn't answer when spoken to.

The significant point is that the Nihilist Spasm Band has now been engaging in this absolutely pointless activity for more than 35 years. They have worked hard for their status. They were young when they started, and are now pensionable or nearly so, and they play more or less as they did at the beginning. It seems they have not improved at all -- but then, if they did get better, how could anyone tell? In any case, longevity and repetition have done their work: The band is now officially designated "legendary."

The legend stretches beyond Canada. Certain performers in Japan, sometimes called "noise artists," report with gratitude that their art has been influenced by the Canadians. The Nihilist Spasm Band has been issued on CD in Japan as well as in North America, and in 1996 performed in Tokyo, Osaka and Kyoto. It is said that a mint copy of the band's first record, called No Record, brought $900 from a Japanese collector. They have also made public noises in New York at the Knitting Factory, a venue that is itself moving steadily toward legendary status.

Around the time they were starting, Greg Curnoe (1936-1992) described them to me. He was a leading artist of his generation and he was helping found an unusual art movement. In a period when most artists focused on the standards of metropolitan centres, and Toronto artists eagerly imitated the New York masters, Curnoe and his friends in London proudly declared themselves regionalists. Curnoe, John Boyle and Jack Chambers (1931-1978) used art to explore and exalt their own part of the world. Curnoe played in the band until his death. Two of the artists who emerged alongside him, Boyle and Murray Favro, are still part of it.

Curnoe was also founding the Nihilist Party, though he was never much of a nihilist. The term describes someone who believes in nothing, and he believed in a lot -- Canadian independence, his own talent, Canadian history, his family and surroundings, the Canadian tradition in art, etc. The Nietzschean idea of nihilism ("the absolute repudiation of worth, purpose, desirability") was a long way from his view of the world. But the term appealed to him, and he started or helped start not only the band and the party but also the annual Nihilist Picnic. He gave me the Nihilist Party's official lapel button, a large NO. I wore it for a day or so, eliciting a few puzzled glances. Had I only worn it every day for 35 years, I might have become ... well, no use idly dreaming about the past.

The Toronto International Film Festival includes a curious feature-length documentary, What About Me: The Rise of the Nihilist Spasm Band, subsidized by the good sports at the Ontario Arts Council. The director is Zev Asher, a filmmaker who has been admiring the band since the 1970s and himself has played in similar bands like Roughage, Bustmonsters and Flying Testicle. In quality, Asher's film runs parallel with the band's, which could be intentional: He seems to believe that when you deal with a chaotic and annoying subject, the best thing to do is make a chaotic and annoying film. He includes many excerpts from performances, a lot of footage about the trip to New York and excerpts from the band's appearance on a Japanese TV variety show, where everyone seems to be giggling (not an uncommon situation on Japanese television). He also includes interviews with members of the band, not one of whom has anything interesting to say for himself, at least on this film. Viewers of What About Me who wonder what the joke is will be dismayed to discover there isn't one. Nor is there a trace of irony.

When they played Chicago, a critic at the Tribune called them "unpretentious," which recalled what Churchill said when someone remarked that Clement Attlee, the Labour prime minister, was modest: "He has a lot to be modest about." Even so, they are said now to be a significant part of the international noise movement, which they celebrate annually in London at their No Music Festival.

Some of the more ambitious devotees of the avant-garde will want to see What About Me and hear the band in person or on CD. Others, searching for an equivalent but more participatory form of cultural expression, will go into their kitchens and bang some pans together. If they like doing that, and remember to do it every week for 30 years, it's absolutely certain that they, too, will one day be legendary.

No Nihilist Spasm Band In Mulhouse

The Sweetest Country This Side of Heaven 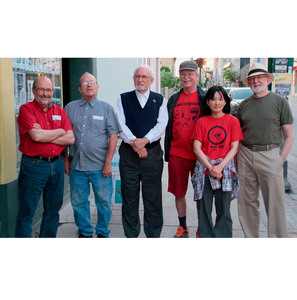