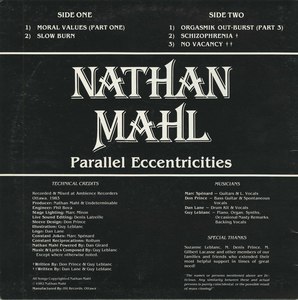 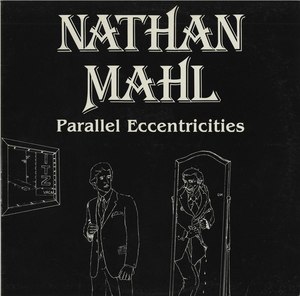 Way back in the early 80s, Nathan Mahl, from Quebec, were struggling to keep the flame of prog alive in a time when the word itself was considered worth of reviling and insult. But keyboardist Guy LeBlanc and his partners were determined to cultivate a jazz fusion oriented progressive sound rooted on the peculiar joyfulness of Canterbury acts such as Hatfield & the North and National Health, the elegant dissonances of the rockiest Gentle Giant, the exquisiteness of Holdsworth's and Bruford's solo efforts, and even some touches of the colourful fresshness of Pastorius-era Weather Report. The admirable thing about this whole process of absorption and assumption is that Nathan Mahl manage to create something of their own from the confluence of all these elements: while well inserted in a certain tradition of making complex classy music, the result is not derivative, but stimulatingly original. The foursome's musicianship is superb and flawless, and the enthusiasm that they use while showing off their individual proficiencies is only equaled by the artistic intelligence they invest in their constant interplaying. The sophistication of 'Slow Burn' and the fiery energy of 'Orgasmik Out- Burst' are awesome, just to mention a couple of examples. 'Moral values (Part One)' opens up the album with a candid melodic vibe that takes us back to hatfield and the most dynamic moments of classic Caravan: for the last half, things turn a bit more symphonic, ELP-style perhaps, due to the predominant role conquered by LeBlanc's Hammond organ. 'Slow Burn' is the second track, more focused on the jazz element, exemplifying what I said before about the mixture of Canterbury and Weather Report. 'Orgasmik Out-Burst (Part Three)', to a certain degree, predates the kind of power jazz-rock that will be particularly relevant from the early 90s onwards, but in itself it is an exciting exercise of jazz-prog. The band can even allow themselves to become somewhat catchy on 'Schizophrenia' without letting go of their commitment to making complex music. 'No Vacancy' sets a sort of bridge between Dixie Dregs and late 70s Weather Report, almost as catchy as the preceding piece. The whole album is jazz-prog-rock at its finest! A terrific starting point for a band that nowadays are well considered in the prog circuits. as they deserve to be.
-Progarchives.com

During the 1980's and 90's, some of the band rehearsed and recorded new material. In 1999, the released their second album "The Clever use of Shadows" and have recently recorded "Exodus" in 2008. Leblanc released a solo effort in 2004. Here is the bands website: http://www.myspace.com/nathanmahl