Nathan Mahl has existed since 1982. The original members (Guy LeBlanc, Donald Prince, Mark Spenard, Daniel Lacasse) started this group because they wanted to explore a direction in music that had been inspired by many great artists and bands, mainly from the 70s. Each member brought his own ideas and infused his own style.

The band’s first LP, Parallel Eccentricities, was released in 1983, and re-issued on cd in 1997, which includes a CD-ROM supplement featuring photos, videos and other goodies.

During the late 80s and early 90s, some of the original members gathered and composed, rehearsed and even recorded stuff. Other times, entire new line-ups were assembled to create new music for the band. In all cases, however, no releases emerged, though much was recorded.

But the late 90s were ripe for a NM resurgence, and in this spirit came the 1999 release of Nathan Mahl’s second disc, the Clever use of Shadows. Produced by guitarist Jose Bergeron and Guy LeBlanc, with Claude Prince on bass, and Alain Bergeron on drums (the two Bergerons are not related). In order to ensure that future Mahl recordings would be released, LeBlanc founded Mahl Productions with his partner Dawn, and the company's first release was the Clever use of Shadows in January 1999. On the strength of this disc, the band was invited to perform at the inaugural NEARfest, in June 1999.

Over the following 3 years, LeBlanc was busy writing, producing and releasing Nathan Mahl’s Heretik trilogy. For this massive piece of music, inspired by Thomas Szasz's The Manufacture of Madness, the performers with LeBlanc were Alain Bergeron, Claude Prince, Mark Spenard, Daniel Lacasse and Guy Dagenais, respectively.

While recording the first volume of Heretik in 2000, LeBlanc was invited to join the classic British prog group Camel for their Y2K tour and subsequent tours and albums.

In 2003, the original line-up reassembled for a re-working of the sequel to Parallel Eccentricities, this time naming it Shadows Unbound. For this group of songs, Jean-Pierre Ranger was invited to lend his lead vocal stylings, complementing the Nathan Mahl sound as he had done briefly in 1983. LeBlanc also left Camel in 2003 (due to family illness), and spent the next year making his second solo disc, released in 2004.

Also in 2004, Nathan Mahl (LeBlanc - Spenard - Lacasse) contributed the opening 21 minute piece to Colossus/Musea's "Odyssey-the Greatest Tale...". The following year, the urge to perform some of their now-vast catalog of songs compelled LeBlanc - Spenard - Lacasse - Dagenais - Bergeron (Alain) to take the stage for the first time since 1999, at Prog in the Park, in Rochester NY.

The 2006 version of Nathan Mahl (LeBlanc, Spenard, Dagenais, Lacasse) performed in May and October, in their hometown of Ottawa. The May concert was videotaped and recorded for eventual release on DVD.

Once again, in 2007, a major line-up change occurred; gone were Lacasse and Spenard, and back was Alain Bergeron in the drum seat. The new face in Mahl was Tristan Vaillancourt on guitars (recruited by Dagenais). Fuelled by a desire to record and perform again, the band began Nathan Mahl's Exodus, and performed at the Festival des Musiques Progressives de Montreal in September. Also that year, this line-up contributed yet another piece (the Comfort of Tears) to a new Colossus/Musea project: Inferno (to be released in 2008). Upon completion of the Exodus, Vaillancourt left the group for personal reasons.

The Clever Use of Shadows

The Clever Use of Shadows 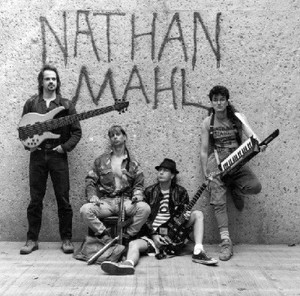