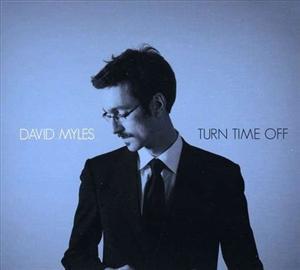 In a few short years, David Myles has gone from being a bright shining light on the local music scene in his native Fredericton to being one of Atlantic Canada’s most highly regarded singer-songwriters.

If you’ve had the opportunity to see this lean, lanky, be-suited troubador in concert, you’ll have no difficulty understanding why.

Myles is the musical equivalent of the full meal deal.
-The Guardian

He writes interesting songs that appeal to a broad cross-section of people, he has a voice that lends itself easily to a number of different styles of music, he plays respectable guitar and, as if that weren’t enough, literally oozes charm.

Myles can be so engaging on stage and so disarming that people sometimes fail to appreciate just how good a songwriter he actually is.
Myles’ 2008 release, On The Line, should have erased any doubt as to whether he has what it takes to go the distance.
But if you still need to be convinced I strongly suggest you pick up a copy of Myles’ latest offering, Turn Time Off, when it hits the streets April 20.

Helmed by award-winning artist/producer Joel Plaskett, who also co-wrote one of the album’s 11 songs, Turn Time Off is one of those records that had me from the minute I popped into the slot.
And it’s not because he was offering up more of the same stuff that first aroused my interest in Myles in 2006 when he released Things Have Changed.

Turn Time Off is in fact a different kind of record for Myles.

This is essentially a pop record, albeit a pop record with a healthy injection of soul, a little dash of folk and a smidgeon of bluegrass.
Think smooth. Think soulful. Think wonderful. Think Stephen Bishop meets Sam Cooke.

Turn Time Off is a very personal record and a very insightful record.
It’s about self-examination and putting things into their proper perspective.
It’s about discovering what you need to give life meaning.
It’s about the importance of love and building relationships.
It’s about how we view change and how we deal with it or, as the case may be, don’t deal with it.

These are passionate, heartfelt songs but they are neither mushy are overly sentimental.
Turn Time Off is a handsomely crafted record, with arrangements that serve Myles’ music but do not overpower it.
Myles wrote nine of the songs and co-wrote the remaining two.
Out of Love was co-written with Plaskett, while So Far Away was written with bluesman Garrett Mason.
The story behind the album is in itself interesting.
The seeds for the record were sewn during the summer of 2009 while Myles and his band were on a European tour opening for U.K singer Jools Holland.

During a break in the tour they rented a houseboat in Amsterdam and spent some time on-board playing around with some song ideas.
When Myles completed the songs he and Plaskett set to work building the record in Plaskett’s studio where they recorded on a 16-track, two-inch tape machine that gave the songs a rich, analog sound they felt captured some of the spontaneity and joy of a live performance.

Myles was joined in the studio by longtime bandmates Alan Jeffries (guitar) and Kyle Cunjak (bass) as well as a number of special guests, including keyboard player Joanna Borromeo and drummer Joshua Van Tassel. Plaskett also played some guitar.
It’s a little early in the year to start making predictions about how this record may fare when next year’s ECMA and Juno Award nominations are announced, but I suspect it will fare very well.

Choice cuts on this set include Out of Love, People Don’t Change, Turn Time Off, Pair of Shoes and Gone for Long.