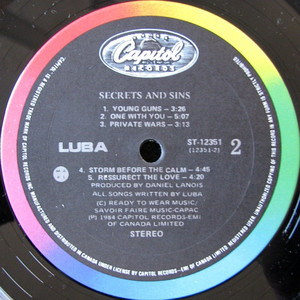 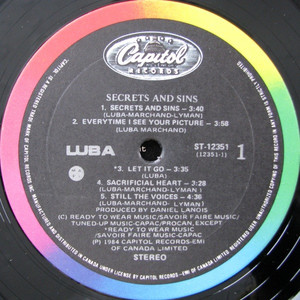 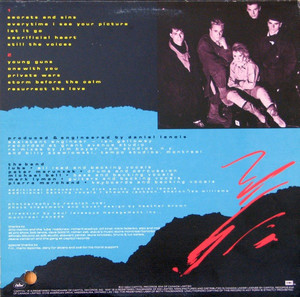 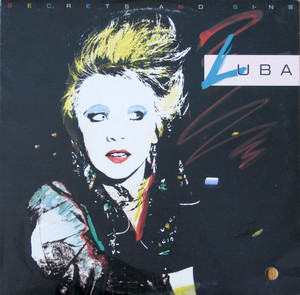 Secrets And Sins is the first full length album on Capitol-EMI of Canada by Canadian singer, Luba and band. Produced by Daniel Lanois, this breakout album won Luba Juno Awards for "Best Female Vocalist" and "Female Vocalist of the Year" in 1985. Included is the calypso-reggae style hit single "Let It Go," later featured on the motion picture soundtrack for 9 1/2 Weeks. Other popular singles include "Secrets And Sins," "Storm Before The Calm" and the remake of "Everytime I See Your Picture."

Lubomyra Kowalchyk was born in 1958 in Montreal, Quebec. During her teens she travelled across Canada performing traditional Ukrainian folk songs at weddings and festivals. Growing up she studied piano, guitar, flute and voice. She was a fine-arts student when she formed a band called Zorya in 1973, releasing an album. In 1977 she released her second album titled. Lubomyra. In 1978 she formed a band named Luba with herself as the lead vocalist. Then, when her father died in 1979, she wrote what would become her signature song, “Everytime I See Your Picture”, as a tribute to him. The first studio album for the band Luba, Chain Reaction, was released in 1980. A Luba (EP) was released in 1982 containing “Every time I See Your Picture”. The song climbed to #1 in Ottawa, #3 in Halifax, #6 in Montreal and #11 in Kitchener (ON). She performed in front of 12,000 rock fans at the Montreal Forum in January 1983. She was the opening act at that concert for the headliner Chris de Burgh.

In the fall of 1984 Luba had a hit record titled “Let It Go”, which peaked at #8 on CKOI in Montreal. The single spent 18 weeks on the Montreal chart. It also climbed to #8 in Ottawa. In 1985 she recorded four songs that were featured in the Canadian animated cartoon series The Raccoons. Her single “Storm Before The Calm” climbed to #5 in Montreal in April 1985.

In 1986 Luba released a single titled “How Many (rivers to cross)”.

How Many Rivers To Cross by Luba
Luba wrote “How Many (rivers to cross)”. The song is about someone who is trying to adjust in the aftermath of the end of a relationship. She sings “…and I’ve got to get on with my life. But I don’t know how.” The journey on her own is one of thunder, storm and rain. There are many rivers to cross and “crosses to bear.”

A cross to bear means that someone has an unpleasant situation that they, alone, must deal with. When someone has a cross to bear, she or he can not share that burden with anyone else. A cross to bear describes an onerous task, a difficult relationship, or a particularly stressful situation. The term a cross to bear came into use in the 1500s, and is derived from the story of Jesus’ death in the Gospels. As part of his punishment, Jesus was forced to carry his own cross to the place of his crucifixion. From this, carrying a cross came to symbolize Jesus’ suffering, and by extension, the suffering of all human beings.

Several more albums were released and Luba won three Juno Awards for Female Vocalist of the Year in 1985, 1986 and 1987.

Her cover of the Percy Sledge soul classic from 1966, “When A Man Loves A Woman” was her biggest charting success across Canada. Her cover peaked at #6 on the Canadian RPM singles chart in November 1987.

In 1989 Luba’s fourth studio album was released titled All Of Nothing. The first single from the album was “Giving Away A Miracle”. It climbed to #9 on the Canadian RPM singles chart in the fall of the year. Her second single release was “A Little Salvation”.

Despite Luba’s 1989 album All Or Nothing selling platinum in Canada, she was dropped by Capitol Records. Next, her marriage Peter Marunzak, her former drummer and manager, ended. Then both her grandmother and mother died. Subsequently, her sister was diagnosed with multiple sclerosis. Since her sister needed intensive care, Luba set aside her musical career and focused on taking care of what family she had.

After a ten year break from recording, in 2000 Luba released an album titled From the Bitter to the Sweet. It included the Top 30 Canadian single “Is She A Lot Like Me”.

In 2007 Luba moved to the Caribbean island of Anguilla. In 2014 she released an album titled ICON. This was a “best of” collection of her hits. She also performed for the first time in 14 years. The setting was the Fierté Montréal Festival in August ‘2014. At the time, Luba was interviewed by the Montreal Gazette and told the paper she planned to start a new band a begin touring in 2015.
-Ray McGinnis, May 29, 2021