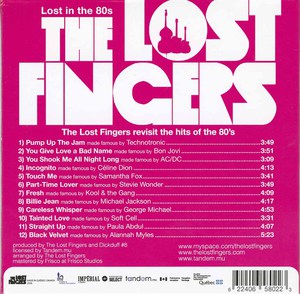 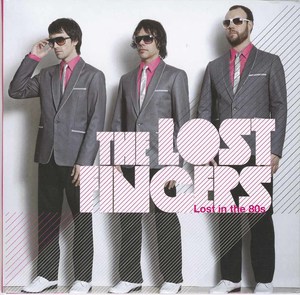 The digital moniker is a nod to this Quebec trio’s patron saint, Gypsy jazz icon Django Reinhardt, who turned a terrible manual injury into a technical advantage on the guitar. Double bassist Alex Morrisette and guitarists Christian Roberge and Byron Mikaloff have all their fingers, and have them poking about in the ’80s hit parade for tunes to twist in a lively, acoustic style, material ranging from AC/DC and Soft Cell to Paula Abdul and George Michael. The first two tracks are telling—the trio’s cover of Technotronic’s “Pump Up the Jam” is the most absurd inclusion, and the strongest.
-Rupert Bottenberg

The Lost Fingers are a Canadian gypsy-jazz music group based in Quebec City. Guitarist Byron “Maiden” Mikaloff and vocalist Christian Roberge met at the Quebec Conservatory of Music, and participated in several music projects together before The Lost Fingers. Formed in 2004, the band drew inspiration for the name from legendary jazz guitarist Django Reinhardt, who lost the use of the 3rd and 4th fingers on his left hand in a caravan fire at the age of 18. In 2006, Mikaloff and Roberge recruited bassist Alex Morissette, and the lineup was complete. Their young history as a band has already seen them opening for the French guitarist Patrick Saussois, appearing in three international music festivals, as well as playing live on several television and radio shows.

Lost in the 80s, their debut album of jazz covers of 80’s songs (in a French accent, no less), earned a platinum certification for sales of 100,000 within Quebec alone. The album’s success snagged the trio a few of Canada’s coveted Juno Awards – and have been previously billed as the stars of the Montreal Jazz Festival. Now the band is attempting to bring this buzz and success stateside! In addition to their über-fun catalog of 80’s arrangements, The Lost Fingers recently released a cover of Michael Jackson’s “Billie Jean” as their tribute to the late-great icon.
-Shockya.com