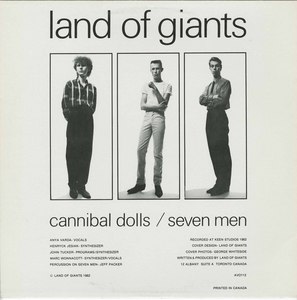 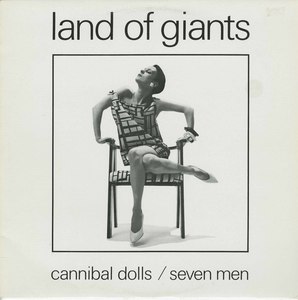 Q:
LoG was founded in 1982. How would you call your style of music and which bands were an influence?

Marc Wonnacott:
"Actually, Land of Giants kind of came together in '82. It was actually started in '81 after I retuned to Toronto from the UK. Henryck had heard some of my solo recordings and attended a couple of my solo gigs (most notorious - opening for Jayne County and the electric chairs) prior to my sabbatical in London.

We went through three singers, four if you include me; and a number of other musicians in an attempt to put a band together. Nothing was working until John Tucker who I knew from his days in a band called Keen Modern Units came over to hear what Henryck and I were working on - and about a bottle of whiskey later we were playing a whacked out version of The Girl form Ipanima (I think).
John then suggested we pick a couple of songs and come over to his studio and record them. As we started recording them I realised that it made far more sense to get someone else to sing them - my dilutions of a sort of Bryan Ferry grandeur were proving unfounded. That's when Anya became part of the band. Those first two songs were Cannibal Dolls and Seven Men.

As for influences - besides the usual Eno, Roxy, Bowie - I listened to a lot of Ultravox, John Foxx, Kraftwerk, Harmonia (Connie Plank being one of my favourite producers), Sparks. We were also listening to Visage, Bauhaus, OMD, Simple Minds, DAF, Joy Division/New Order, etc as well as, forties film songs, Nona Hendrix and some of the crossover funk. I was spinning tunes at a couple of clubs at the time as well, so there was a lot of music going through my head that spring.As for style, electrobeat was how we described it back then."

Jeff Packer of Boys Brigade made a guest appearance providing extra percussion. That summer, the single was a top hit in Toronto's alternative clubs and receiving regular airplay on alternative radio. That July in Germany, there was a review of the single in Guerilla Beat and that opened the door that made the single available in small numbers through Polydor Germany as an import that Christmas. In New York City the single made it on to the turntables of some of that cities hippest clubs. In September, they recorded Thing Called Love, Fountains, and I Will and a video was shot for Cannibal Dolls (unfortunately now lost).

Supplies of the original pressing of the single had run out by Christmas and since the band was talking to record companies the decision was made not to press further copies. Instead the band concentrated on recording further demos.
Shortly after that, rumour has it that John Peel played the single on his BBC radio show early in 1983.

Q:
How proved is it, that John Peel played a song from you on his famous radio show? Did you ever get personal response from any other place in the world?

Marc Wonnacott:
"I know Henryck dropped off a copy and met with John Peel's staff in London in November of '82 while he was on holiday. As I said, I got a call from a friend who lived in the UK the night it was played. I don't know if that information is in the BBC archives. It was probably Dec of '82 or early in '83 it was played. It would be interesting to find out.

Most of the response that came from outside Canada, at the time came from places behind the old iron curtain. We apparently were featured in a book on 'western' rock and roll that was published in Budapest. If I remember we got more fan mail from eastern block countries than anywhere else. Five years ago, and the person who started me on this journey to release the material, Jens from Sweden tracked me down through my art site on the net. At the time I was flattered but when I started getting emails from other Swedes, and then France and Germany it all started to gather momentum. But it was Jens who got it all started, and I guess he is the one who should be thanked."

The next recording session early in 1983 brought a rocky Security Squad, featuring John Tucker on guitar, and an early rap fusion Fire with Fire that had John Tucker rapping alongside Anya's vocals. Music historians might find it interesting that Kenny McLean of Platinum Blond fame joins in on the backing vocals. Later in the spring of 1983, John Tucker became one of the first in Canada to own a Fairlight CMI (computer musical instrument) and land of giants started experimenting with the new technology, which resulted in Just Yet.

Rusty Egan of Visage, and Midge Ure of Ultravox fame both expressed an interest in producing the album, but talks with the record companies fell through later in 1983.

John Tucker's commercial music business Keen had started to blossom and he left to concentrate on that. The remaining members took some time to regroup and re think things. A new member (Jon Andrews) was brought in to attempt to put together a live show. This didn't pan out although Jon, Henryck and Anya recorded a three-song demo, under the land of giants banner in the spring of 1984.
Marc Wonnacott returned to the project at the end of 1984 and later that winter he and Henrych built a studio in Henryck's dining room where they recorded Room with A View, and Key To Your Heart in early 1985. Again the tape was well received by the industry, but again, they wanted to hear more. Unfortunately, time had run out for land of giants and everyone decided it was time to move on to other ventures.

And then, like just about every other band in the history of the Canadian music industry, nothing happened. It’s taken almost 30 years for the world to catch up to Land of Giants.Unfortunately, time had run out for land of giants and everyone decided it was time to move on to other ventures.

Today Anya lives in Los Angeles, Henryck lives in Toronto and is involved with the film and television industry and renewing his interest in music, John now resides in Canada's west and remains active in music scoring and production (still utilizing his faithful vintage Fairlight CMI Series III). Marc is an painter/artist who still writes music from time to time, as well as owning a decorating business in Toronto. John Tucker has re mastered all the material and it sounds amazing.

Marc Wonnacott:
"When we started the Land of Giants project, we never thought we’d be a foot note in a greater musical history, or have a part in creating a genre," says LOG’s Wonnacott who’s also put together a compilation of the band’s never-issued tracks.

"It's nice to know that my misspent youth continues to inspire a new generation to misspend theirs."
http://www.nowtoronto.com/daily/story.cfm?content=174057
http://blogs.myspace.com/index.cfm?fuseaction=blog.view&friendId=127264197&blogId=412429137