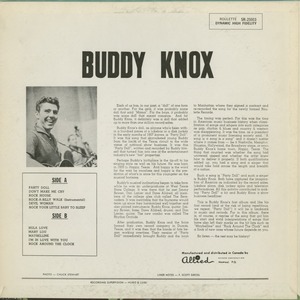 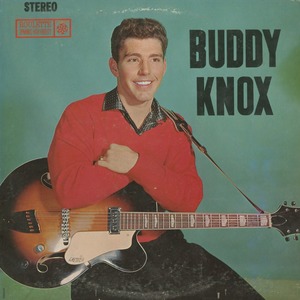 Buddy Knox was the first artist of the rock & roll era to write and record his own number one hit, 1957's million-selling classic "Party Doll" -- a pioneer of the Lone Star State rockabilly sound that would later earn the name "Tex-Mex," the arc of his career anticipated that of fellow Texan Buddy Holly, yet while Holly is now enshrined in the pantheon of rock's true immortals, Knox's contributions remain sadly underappreciated. Wayne Knox was born July 20, 1933 on a farm just outside the tiny West Texas town of Happy -- during World War II, his mother Gladys performed with her siblings as part of a family gospel group, although his love of country music first inspired him to pick up the guitar. After high school Knox attended West Texas State College, earning a business administration degree while moonlighting in an amateur vocal group called the Serenaders that also included double bassist Jimmy Bowen and guitarist Donny Lanier; in 1955, the trio rechristened themselves the Rhythm Orchids, so named after their purple shirts they wore on-stage. With the addition of drummer Don Mills, who first joined the Rhythm Orchids on-stage with nothing more than a pair of brushes and a cardboard box, the group's melancholy country covers acquired a swinging backbeat approximating something close to rock & roll, much to the delight of the assembled barroom patrons.

Following a local gig, the Rhythm Orchids met Sun Records star Roy Orbison, who recommended they travel to Clovis, New Mexico to record with producer Norman Petty (better known for his subsequent work that other famous Texan rock & roller, the aforementioned Buddy Holly). Mills opted to return to school, so the remaining trio recruited drummer Dave Alldred to play on two Petty-produced tracks: "Party Doll" -- written by Knox at the age of 12 -- and "I'm Stickin' With You," the latter featuring Bowen on lead vocals. After handing Petty their $60.00 studio fee, the Rhythm Orchids returned to West Texas with acetates in hand; Blue Moon Records owner Chester Oliver soon pressed 500 copies, and when the initial run sold out -- thanks in large part to heavy airplay from Amarillo radio personality Dean Kelly -- the band founded its own label, Triple D, to issue 2500 more. Lanier's sister, a fashion model living in New York City, then passed a copy to music publisher Phil Kahl, and with partner Morris Levy, Kahl licensed the single for national release via the newly formed Roulette label. Roulette split the original Petty session into two separate releases, with Bowen's new "Everlovin'" backing "I'm Stickin' With You" on Roulette (4001) and "My Baby's Gone" appended to "Party Doll" (Roulette 4002); while the former reached the Top 20, selling in excess of a million copies, "Party Doll" proved far more successful, remaining on the best-seller list for 23 weeks and topping radio play lists coast-to-coast following a memorable rendition on television's Ed Sullivan Show.

From that point forward, Knox and Bowen pursued simultaneous solo careers for Roulette, although both continued employing the Rhythm Orchids as their backing unit. The follow-up to "Party Doll," "Rock Your Little Baby to Sleep" -- credited to "Lieutenant" Buddy Knox, a nod to the singer's then-ongoing six-month stint in the U.S. Army Tank Corps -- cracked the Top 30 in mid-1957 and again sold a million copies, as did its follow-up, "Hula Love." Knox's vocal style on these seminal efforts was clean and natural, the band's rockabilly sound more a jaunty, skittering update of traditional country than a white derivation of R&B, à la Holly -- in fact, by the end of 1957 Knox was arguably the bigger star of the two, headlining DJ Alan Freed's national package tours and even appearing in the feature film Jamboree. He closed out the year with the rave-ups "Devil Woman" and "Swingin' Daddy," followed in mid-1958 by a cover of Ruth Brown's "Somebody Touched Me" that reached number 22 on the pop charts. The subsequent "That's Why I Cry" went nowhere, however, and with 1959's "I Think I'm Going to Kill Myself" -- a song banned on many radio stations -- Knox & the Rhythm Orchids scored their final Hot 100 entry.

After two additional singles for Roulette -- "Taste of the Blues" and 1960s "Long Lonely Nights" -- Knox left the label following a dispute about royalty payments, and he signed as a solo act with Liberty, where producer Snuff Garrett softened his approach considerably. His Liberty debut "Lovey Dovey" reached number 25 in 1961, but Garrett's teen idol-inspired production did not serve Knox well, and successive efforts like "Ling-Ting-Tong" (his final pop chart entry, at number 65), "Three-Eyed Man," "Dear Abby" and "All Time Loser" muted the dynamic presence of his earliest, finest music. Knox cut nine singles for Liberty in all before teaming with longtime A&R exec and promoter Ray Ruff to form the Ruff label, issuing just one single for the company, 1964's "Jo Ann," before signing on with Reprise for a pair of little-heard efforts, 1965's "Livin' in a House Full of Love" and the following year's "Love Has Many Ways." With a move to United Artists, Knox teamed with house producer Bob Montgomery to become a full-fledged country artist -- when "Gypsy Man" hit the Nashville charts in 1968, it proved his final chart hit. Knox ultimately moved to Vancouver, opening a nightclub called the Purple Steer and maintaining a relentless tour schedule throughout the 1970s and 1980s; on February 5, 1999, the longtime smoker was told he had contracted inoperable lung cancer -- just nine days later, he was dead.
-Jason Ankeny, AllMusic