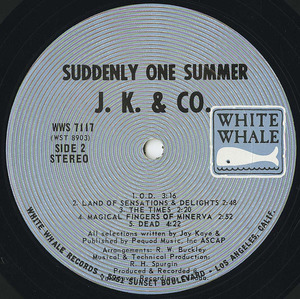 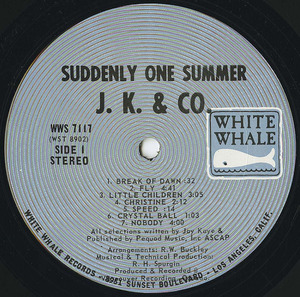 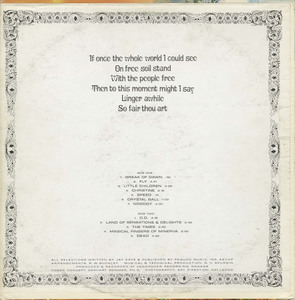 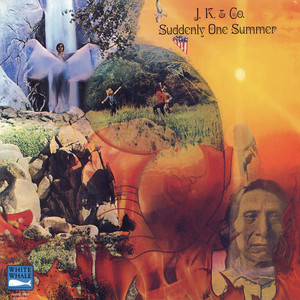 An album of dreamy soft psychedelia is something of an undiscovered gem for pop-psych enthusiasts. Recorded in Vancouver, Canada, until recently, nothing was known about the identity or true location of the band. Housed in a delightful pop-art cover, this concept album was meant to "depict musically a man's life from birth to death" - it was written by Jay Kaye who was just 15 years old at the time. Heavily orchestrated with lush arrangements, silky vocals, backward effects and found sounds, it is dreamy soft-rock that caresses psychedelia and flirts with the 'baroque'. It occupies a hazy territory somewhere between Sgt. Pepper and The Magical Mystery Tour, the Left Banke's second album and The Zombies' Odessey And Oracle. Highlights include the delightful Eastern-influenced Magical Fingers Of Minerva, some superb, melodic slices of pop-psych like Fly and Little Children, the guitar-driven instrumental Speed and the prog-psych finale Dead which gives way to the opening bars of the album at the end. The yearning vocal style is appealing and evident throughout but particularly evident on Crystal Ball and Nobody.
-Fuzz, Acid & Flowers

Summer. It's as much a state of mind as it is a season. This is particularly true for those who are still attending school. Whether you're a first-grader or a college senior, the magical lure of summer vacation, fraught with possibilities, is a powerful force. Like New Year's resolutions, many ambitious summer plans quickly fragment and are left unfulfilled. In these cases, the answer to "I know what you did last summer" is "not much."

However, some student summers prove more productive. In that season's 1968 vintage, 15-year-old Jay Kaye left Las Vegas and headed to Vancouver. His purpose was not to escape the oppressive Sin City summer heat, but to record an album for White Whale, label home of the Turtles, among others. No slacker, Kaye had done his homework well, bringing with him a stellar set of self-penned songs. Working closely with arranger Robert Buckley, also in his teens, Kaye crafted a song suite, loosely tracing a man's journey from birth to death. Producer Robert Spurgeon recruited a sympathetic cast of session musicians, including local band Mother Tucker's Yellow Duck, to form a psychedelic instrumental menagerie, a "lysergic wall of sound," if you will. But how good could an adolescent singer-songwriter be?

Astonishingly good, as it turns out. Taking cues from the best of the late '60s rock scene, with a special nod to the Beatles, Suddenly One Summer is a mature work seemingly years beyond its young creator. With a vocal style very similar to George Harrison, Kaye is in command from the start, guiding the listener through the album's rich sonic journey. Highlights abound: the sharp, smart pop of ?Christine,? the melancholy lament ?Nobody,? the cascading backwards guitars and cymbals of ?Fly? (solid evidence that Kaye and Spurgeon had read the news that day, oh boy), the hazy, floating trance of ?Magical Fingers of Minerva? and the jolting finale of ?Dead? all fit together to form one of the era's most striking albums.

Unfortunately, it was an album that few heard upon release in 1969. White Whale confusingly chose :36 album opener ?Break of Dawn? as the first single, presumably to generate publicity. The effort backfired as radio stations understandably balked at playing such a short track and the album never gained traction. Kaye formed a band to play the songs after the album was completed but it did little to boost sales. Beyond the California musical underground, the album was largely unknown. Yet, its reputation grew over the decades, especially as fans of new psych-influenced bands like the Rain Parade, Dream Syndicate and the Church began to search out their favorite bands? influences. To serve this groundswell of interest, BeatRocket scooped up the original White Whale analog tapes from which to source this reissue. Sounding better than ever, this edition of Suddenly One Summer will envelop you in three-dimensional sound and leave you wishing that this particular summer was indeed endless.
-Sundazed re-issue

This is a good, semi well-known psych album, indeed there aren’t too many 60s rock fans that dislike J.K. & Co.’s Suddenly One Summer. It’s the only album this group would release. Prior to Suddenly One Summer, Jay Kaye had been in the Loved Ones, though I don’t think this band released any singles.

Jay Kaye was only 15 years old when he recorded this album in 1968. The lyrics, vocals, songs and musicianship are remarkably advanced for someone who was so inexperienced in the studio. Jay Kaye made the trip from Las Vegas to Vancouver, Canada to record the lp with top flight session musicians (among them members of noted Vancouver band Mother Tucker’s Yellow Duck). The album was inspired by recent Beatles’ masterpieces and of course LSD, so it’s not surprising that much of this record is full of orchestral psychedelia and heavy studio effects – music with a spiritual slant. Another teen, Robert Buckley aided Jay Kaye with many of the album’s arrangements and psychedelic effects. It was he who created the decaying backward effects on the masterful “Fly,” a track that sounds well ahead of its time and similar in feel to prime-era Radiohead (though 30 years prior).

Suddenly One Summer was conceived as a concept album and briefly featured in Billboard claiming “to depict musically a man’s life from birth to death.” At least half the album is full of great psychedelia. “O.D.” features wild guitar playing, great drug addled madness, and soaring vocals, “Fly,” as mentioned before, is an all-time psych classic, and “Magical Fingers Of Minerva” is a great sitar based rocker that usually ends up on trippy compilations. Other compositions of note are the gorgeous acoustic track “Nobody,” a great pop rocker titled “Christine,” and the dramatic finale, “Dead.” The LP plays from strength to strength and never falls off into the deep end.

J.K. & Co.’s album was a decent size underground hit in California, leading White Whale to release a single to capitalize on the group’s popularity. They chose the 36-second album opening intro which at the time was seen as a major marketing disaster. In the end, White Whale’s terrible management blunder would halter the career of Jay Kaye and also hurt the company’s ability to market J.K. & Co as a serious group. After the record’s release Kaye had even put together a band with his Cousin John (bass) and friend Rick Dean (drums) to promote the LP’s songs live but success eluded them. In 2001 Sundazed released this great conceptual acid album through their BeatRocket label.
-therisingstorm.net