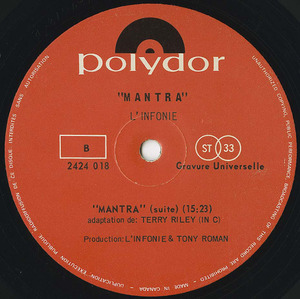 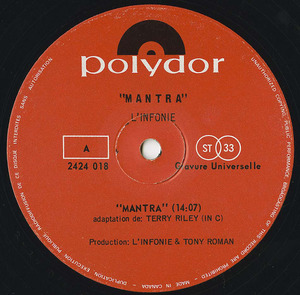 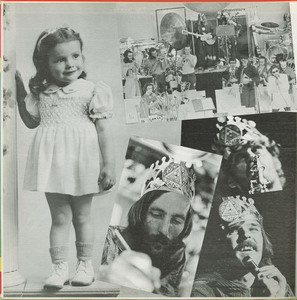 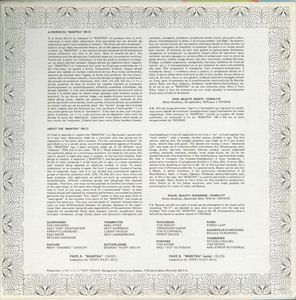 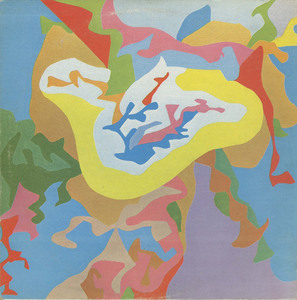 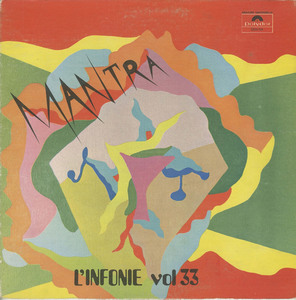 For it's second album, L'Infonie recorded Walter Boudreau's arrangement of Terry Riley's landmark piece for wind ensemble "In C," here re-titled "Mantra." Boudreau modified it in order to fit L'Infonie's possibilities, but he also added a rhythm section. Therefore, this is the grooviest version of "In C" ever recorded. The bass (electric) and drums support the piano's pulsation, while an assortment of percussion instruments are used to punctuate events as they happen in order to give the piece relief. Riley's score is made of 53 short events placed on a pulsation. Each player has to move from the first to the second to the third, etc., until he reaches number 53, but he can repeat each of them as many times as he wants. Therefore, the piece evolves through some kind of osmosis. This impression is very palpable in L'Infonie's interpretation. The studio they recorded in was using 30-minute tape reels, so the album fades out around number 48. In the liner notes, Boudreau announced the remaining part would be released on a future L'Infonie record, but that promise was never fulfilled.
-Francois Couture, AllMusicGuide

Infonie was created during Quebec/Kébèk's expo '67. Inspired by the concept of hell by Refus global de Borduas, L'Infonie was a concrete manifestation of total acceptance. In the beginning they created a parallel world with a commercial culture, an aesthetic approach diving in all kinds of forms of expression, in a revitalizing happening mad creation.

A book with 333 3/3 pages and 33 illustrations was the curriculum vitae (birth, evolution, ending) of l'Infonie, something that would characterise Kébèk from 1969 until 1973. With 33 artists, all lucid dreamers, L'Infonie became a polyvalent spectacle with paintings, sculptures, theatre, poetry, and music (popular, concrete, electronic and contemporary, folk and free jazz). The first book was followed by 6 others, 8 discs, a dozen of films, painting expositions, 5 theatre pieces.Walter retlaW uaerdouB Boudreau was the musical motor of l'Infonie, Claude Edualk Ts-Nyamreg St-Germain was the delirious teller, and Raôul luôaR yauguD Duguay was the verbal motor. Together they formed a creative basic trinity.

Vol.33 Mantra is based upon Riley's in C, with Raôul Duguay, trumpet. It should have been perfect for my show in many ways. "In C" is like a kind of mantra in favour of life and its manifestation. Still inspired by the '67 expo, where new ways of living were considered (meditation, drugs, macrobiotic cooking,..) this meant another modification of our perceptions within the time limitation of a music piece. "In C" has the advantage of being able to be repeated to express that all in all manifestation ("touttt é to bouttt" / everything is in everything). Musically it was inspired by La Monte Young's "House of Dreams", performed by musicians like Terry Riley, Philip Glass, Steve Reich, Bob Ashley, John Cage, Karlheinz Stockhausen ("Mantra" & "Stimmung"). With Pandit Pran Nath from Tibet La Monte Young and Terry Riley sang the "Ôm" pulsation, expressed trough "in C" in 53 motives. Express everything or "Express toutt" becomes the life impulse of a kind of locomotive of life calling "toutt-toutt-toutt", followed by 53 wagons. All motves, languages are reassembled and dissembled by one another, as a symbol of the eternal change, an omega of evolution. The goal through this piece was to get to that ever changing evolution pulse, transforming into a hymn to life. Life and its creation are celebrated through the forming of each cell and atom.
-http://mutant-sounds.blogspot.com/