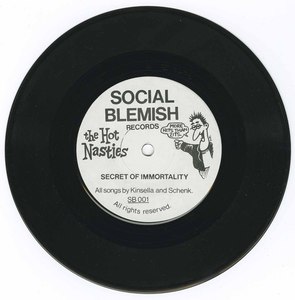 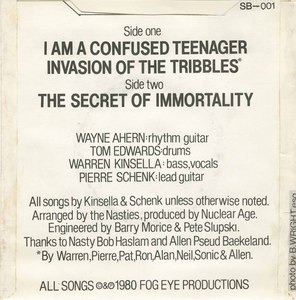 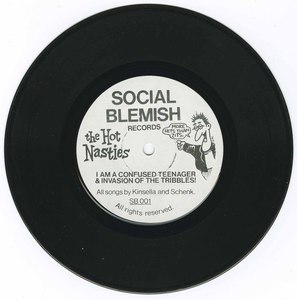 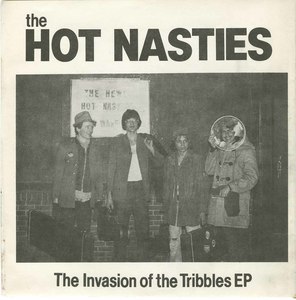 Warren Kinsella (bass/vocals), Pierre Schenk (guitar), and Alan McDonald (drums) formed a group known as The Hot Nasties in 1976; The band would also contain Wayne Ahem on rhythm guitar and Tom Edwards on drums (he would take over for McDonald who would go onto another Canadian punk band The Sturgeons). Coming from Calgary, Alberta, the band originally went by the name The Social Blemishes. In 1977, they changed their name to the Not Nasties, naming themselves after a triple x rated film.

In 1980, the Hot Nasties released their Invasion of the Tribbles EP. The EP was released on Social Blemish Records, Kinsella's own label. The Ep contained three songs, the chugging punk of "I Am A Confused Teenager", the hectic "Invasion of the Tribbles", and the slow and chunky "The Secret of Immortality". The band would release a full length album of songs on cassette (which is extremely hard to find now), shortly after the release of their first EP. In 1981, the band split up.

In 1994, the bands Invasion of the Tribbles EP was featured on the Canadian punk rock compilation Smash the State Volume 1. Besides playing bass in a punk band in the late 70s/80s, Warren Kinsella would go onto become a Canadian Lawyer, author, and politician. In 2005, he formed a new band called Shit From Hell, releasing an album and Kinsella also released a self titled album as well. The Hot Nasties are a short lived Canadian punk band and while they only have had a few releases they are still known as part of Canadian punk rock history.

In and about 1976, Warren, Pierre, Alan and the other members of The Blemishes liked rough-sounding old stuff by the likes of the Who and the Kinks. In early 1977, Warren bought a copy of the first album by the Ramones, and the Blemishes were forever transformed by punk rock. The Blems practiced in Alan's basement in Southwest Calgary, bought a lot of late-night slurpees, and started to attract attention. On December 21, 1977, they opened for Fosterchild at Bishop Carroll High School. When Alan launched into a twisted, demonic version of 'Heartbreak Hotel,' a half-dozen teenaged girls rushed the stage. The Blems were hooked: maybe they'd never get rich playing tunes like 'Invasion of the Tribbles,' but getting the odd groupie wasn't so bad. In time, they became The Hot Nasties. Only 1000 copies pressed. All songs comped on Smash The State Vol. 1

All songs by Kinsella & Schenk
Arranged by the Nasties, produced by Nuclear Age
Engineered by Bary Morice and Pete Slupski
All songs Fog Eye Productions