Formed in 1976 as the Social Blemishes, the Blemishes were a bunch of punks who discovered the soundtrack to their lives, punk rock, after hearing the Ramones’ first album. The Blemishes practiced their punkish sounds in the basement of former member Alan’s basement. They soon attracted attention, when in December 1977, the Blemishes opened for Foster Child at their local high school where they launched into a twisted demonic version of “Heart Break Hotel”. A half dozen teenage girls rushed the stage and the band was hooked. Over time the Blemishes changed their name to the Hot Nasties. Three of the Hot Nasties songs “I am a Confused Teenager”, “Secret of Immortaility” and “Invasion of the Tribbles” came out on Social Blemish Records (More Hits than Zits). In late 1980, the Hot Nasties issued an album length taped cassette collection of their songs. Their original 3 song EP was part of Smash the State Vol. 1. From Warren Kinsella: Things You Suspected You'd Regret When You Got Older, But Did Anyway, Part 397 Growing up in Calgary, Alberta, in the 1970s, Warren was (not entirely surprisingly) unlike many of peers. To him, a weekend spent smoking dope and listening to Led Zep on headphones was a wasted 48 hours. If he was going to irritate his teachers and like-minded authority figures, there had to be a better way.

Along with his pals, Ras Pierre Schenk, Alan "Flesh" Macdonald and assorted other miscreants who attended Bishop Carroll and Bishop Grandin high schools, Warren decided to form a rock band. It did not matter that neither Warren nor any of his pals couldnt play any musical instrument. What mattered was an unshakeable commitment to non-conformity (to wit, all were early members of something called the NCNA - the Non-Conformist News Agency). The Social Blemishes were born.

In and about 1976, Warren, Pierre, Alan and the other members of the Blems liked rough-sounding old stuff by the likes of the Who and the Kinks. In early 1977, Warren bought a copy of the first album by the Ramones, and the Blemishes were forever transformed by punk rock.

The Blemishes practiced their punkish sounds in Alan's basement in Southwest Calgary, bought a lot of late-night slurpees, and started to attract attention. On December 21, 1977, the Blemishes opened for Fosterchild at Bishop Carroll High School. When Alan launched into a twisted, demonic version of 'Heartbreak Hotel,' a half-dozen teenaged girls rushed the stage. The Blems were hooked: maybe they'd never get rich playing tunes like 'Invasion of the Tribbles,' but getting the odd groupie wasn't so bad.
In time, the Blemishes became the Hot Nasties. Warren (a.k.a. "Nuclear Age") was bassist and lead singer; Ras Pierre assumed the role of lead guitarist; Sane Wayne Ahern played rhythm method guitar; and Just Plain Tom Edwards kept the beat. Most of the songs were written by Warren and Pierre.

Three of those songs, 'I Am A Confused Teenager,' 'Secret of Immortality,' and 'Invasion of the Tribbles,' came out on the above Social Blemish Records (More Hits Than Zits) Extended Play single in 1980. The E.P. now sells for nearly $300 (U.S.!). Later, Alan's band, The Sturgeons, also put out a single on Social Blemish. In late 1980, the Hot Nasties issued an album-length taped collection of their songs. Some were later covered, or adapted, by the likes of Moe Berg (Pursuit of Happiness) and folk star James Keelaghan.
In 1994, a Montreal punk rock fan named Frank Manley issued a book and album about Canadian punk rock called (ironically enough, considering Warren's later involvements) Smash the State. The album featured songs by the Hot Nasties, the Sturgeons, and the two group's Edmonton pals, The Rock'n'Roll Bitches.
Alright, then. Go ahead and laugh.

Invasion of the Tribbles (EP) (re-issue)

Invasion of the Tribbles (EP) (re-issue) 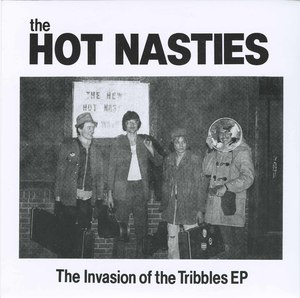