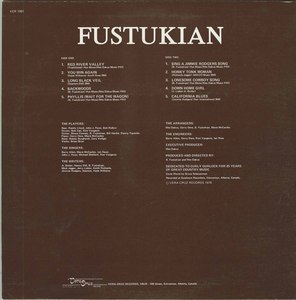 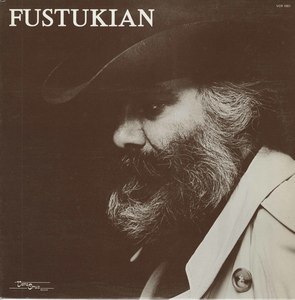 Bryan Fustukian is another of Canada’s unheralded vinyl heroes. His 1979 self-titled album, Fustukian, was released just prior to the launch of Country Music News in 1980, and as such, it received little fanfare in the Canadian music media. Fustukian’s 1981 follow-up LP, “Always”, fared better with coverage in CMN, upon its release - so now its time for a “Flashback” look at the debut album. The album “Fustukian” featured two of Bryan Fustukian’s most notable compositions Phylllis (Wait For The Wagon) which was originally issued as a single on Casino Records, earning Top 20 charting on RPM in 1976; and Lonesome Cowboy Song, which surprisingly only reached #60 on the RPM charts in 1979. The song had previously been recorded by Nashville artist George Kent, (under the title Singin’ Lonesome Cowboy Songs), and released as the flip-side of Kent’s 1976 Billboard charting single on the Shannon Records label. Also pulled as a single from the “Fustukian” LP was his cover version of the Hank Williams classic song, You Win Again, which peaked at #61 on the RPM Top 100 charts in 1979. The album also featured Fustukian’s covers of classic songs like Red River Valley, Long Black Veil, the Jimmie Rodgers nugget California Blues; and a feisty version of the Rolling Stones favorite, Honky Tonk Woman. Bryan Fustukian also showed great talent as a songwriter on this debut album. In addition to his Lonesome Cowboy Song and Phyllis (Wait For The Wagon) tunes, he also wrote a solid bluesy effort in Backwoods, and the superb story song, Sing A Jimmie Rodgers Song (Fustukian’s music was influenced heavily by the fabled Singing Brakeman, Jimmie Rodgers). The album “Fustukian” was co-produced by Bryan Fustukian with noted producer of the day, Wes Dakus, and recorded at Sundown Recorders in Edmonton. Featured session players included such notables as Gerry Dere, Gary Koliger, Brian Sklar, Bob Ego, Danny Tapanilla, etc. Background vocals were contributed by One Horse Blue members Ron Vaugeois and Michael Shellard in addition to Barry Allen and Mavis McCauley, etc. The original 1979 LP jacket contained Bryan Fustukian’s special message: “Dedicated To Curly Gurlock For 25 Years Of Great Country Music”. For the record, the noted radio DJ Curly Gurlock was formally recognized with his induction into the Canadian Country Music Hall of Fame (Broadcast) in 2006.

Since the release of the 1979 LP “Fustukian”, and its follow-up “Always” (many of the songs from these two LP’s are now available on the CD “Fustukian 1973-1993”); Bryan Fustukian has returned to the studio releasing various projects, including the concept album Railroad Songs & Songs Of The West; and he makes a very welcomed appearance with his first Christmas album, “A Fustukian Christmas”, featuring the current radio single release, The Picture (On Christmas Eve) Prior to his success with his country recordings, the St. Boniface, Manitoba-born, Edmonton-raised Bryan Fustukian, also enjoyed airplay on Canadian radio during the 1960’s with rock ‘n roll releases (Kiss Me Quick / Not In Your Arms / Without Your Love, etc.) recorded under the performing name Vik Armen, a name which would also be familiar to radio listeners during that time, when Vik Armen was a popular radio DJ at stations in Lloydminster, Edmonton (CJCA) and Ottawa (CKOY), as well as other stops on the Canadian radio scene. While stationed in Ottawa, Vik Armen also did double duty as a member of the Ted Daigle & The Musicmen band, as well as performing with his own band and his morning show on-air featured the popular character voices Zelda & Scratchy, a comedy skit with fellow-DJ Dean Hagopian.

Throughout his music career, Bryan Fustukian has also been an in-demand actor, with roles in several Canadian-made feature films (Birds Of Prey / Silence Of The North / Loyalties / Isaac Littlefeathers / The Road To Saddle River / Draw / The Gunfighters / etc.).

Produced and Directed by B. Fustukian and Wes Dakus and dedictaed to Curly Gurlock. A great album with a lot of soul. This album was recorded back in the good old days when they used real live musicians without click tracks. We captured some great feels on the bed tracks thanks to Fustukian on guitar and vocal, Bob Walker on bass guitar and Gary Dere on piano.