Fringe, The - Canada's Next Number One Recording Group (EP) promo 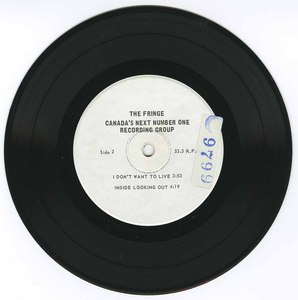 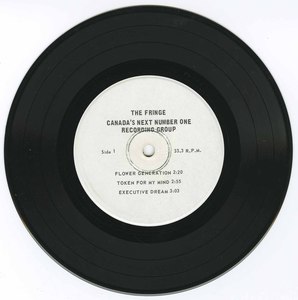 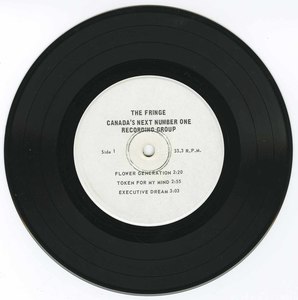 Here is the famous unreleased 1967 promo EP of the legendary Canadian psychedelic garage band from the region of Toronto, Canada "The Fringe", formed by guitarist Chuck Cadman (who also played backup to "The Guess Who" on CBC Television and who became a member of The Canadian Parliament), Doug Daniel, John Murkin and Chris Thomas.

Hailed by Quality records as " Canada's next No.1 recording group", their manager Bill Riley wanted the group to cut an album, an EP and a 45 simultaneously and 11 tracks were cut at the Sound Canada studios to be put out as an album. Instead just a promo-only EP was released and they subsequently broke-up, leaving a small but renown legacy

This is the scarecest garage artifact and most sought out slab of Canadian vinyl in existence and comes with a hefty price tag.

This Toronto-based innovative psychedelic rock band, popular in the late 1960s, toured Ontario and made one cross-Canada tour in 1968 – plus appearing with the newly-formed Guess Who on a Winnipeg TV show. They had four commercially released songs on two singles. Eleven tracks are available here mastered from the original analog tapes including five for the first time.

The Fringe, formed in 1967 and are remembered for having as a founding member the late Chuck Cadman (guitar & keyboards), a three-times elected BC Member of Parliament who died of cancer in 2005. Cadman, together with Doug Daniel (bass), John Murkin (lead vocals & guitar) and Chris Thomas (drums) signed with producer Greg Hambleton and laid down thirteen tracks, some of which Greg licensed to Quality Records, a major distributor at the time. The cover photo was taken by Greg on the steps of the Night Owl in Toronto’s famous ‘Yorkville’ district.