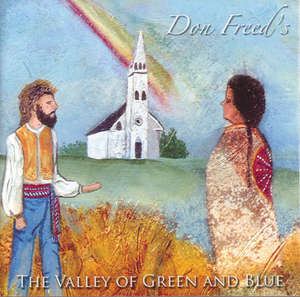 The Valley of Green and Blue

In the fall of the year buffalo would run
Gabriel would ride out with his gun
To get some meat for the winter supply
‘cause he knew that his people could starve and die.

He’d hunt until he needed no more
Then he’d hunt for the sick and poor
The lame and the old and the ones with no guns
He called it the “Society of Generous Ones”.

And when they had all they could eat
Gabriel put away Le Petit
Then they’d get out the fiddles and they’d dance and sing
And that’s what they liked more than anything!

"Recently, I have been telling stories and singing songs to school children. When I ask the groups gathered before me how many of them are Métis, I am pleased to see hands rise. There was once a dark and difficult time when this would not happen. It is to those generations who could not raise their hands that this recording is dedicated." Don Freed

"This collection of songs by Don Freed is rich with history, passion and the essence of what it means to be a proud Métis. Don takes us on a journey through hope and despair, resistance and renewal, and celebration. "The Valley of Green and Blue" is sure to become an important legacy to Métis history and culture. As a Métis artist, Don Freed has made a contribution that will be cherished for generations to come. " Karon Shmon, Gabriel Dumont Institute

"In just 65 minutes, veteran Canadian singer/songwriter Don Freed tells the tale of an entire people, from origin to present day, in a thoroughly researched, wonderfully humanist history of the Métis and the Red River Settlement. The scope and magnitude of this project is almost unfathomable — work began with a small grant in 1991 — yet Freed manages the journey from beginning to end in just 15 songs, culminating with a breathtaking singalong of When This Valley (considered by some to be the Métis national anthem) at the old church in Batoche, Sask. This musical trek, which encompasses folk, roots, blues, jigs and reels, begins in the 17th century and touches on the fur-trade wars, the first settlements at Red River, the massacre at Seven Oaks, the politics of ‘Manitobah,’ the tale of Louis Riel and Sir John A. Macdonald, and the struggle of a people without a home. Along the way we meet many remarkable characters, from the first man named ‘Sansregret’ to Gabriel Dumont and his rifle, ‘Le Petit.’ Aided and abetted by a star-studded cast of local roots and bluegrass players, from Dan Frechette to Sierra Noble to four-fifths of The Duhks, the thin-voiced but always passionate Freed has created a masterpiece of musical storytelling. How he’ll recreate this live is anybody’s guess — but I’d love to see him try."