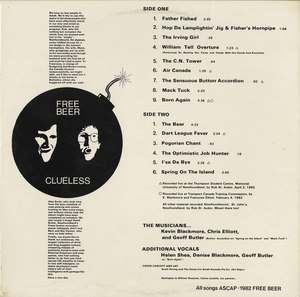 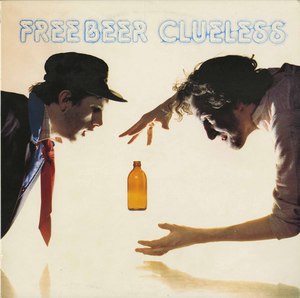 Most of this classic Newfoundland comedy album was recorded the day after April Fools - at the Thompson Student Centre, Memorial University of Newfoundland, by Rob St. Aubin, April 2, 1982. (Live tracks were recorded at Transport Canada Training Commission, by K. Blackore and Francoise Elliott on February 4, 1982).

"We have so few people to thank. We'd like this space to list those people who have most effectively stood in our way and acted as stumbling blocks to our progress. Rob, who did nothing but complain the whole time we worked with him in his "studio", Newfoundsound, the sleaziest, noise-riddled excuse for a tax-dodge in the western hemisphere. His wife, Marie, who grudgingly put up with us for two weeks even though we were providing her husband with the first bit of real work he's had in years. To Francoise, in charge of Budgeting and Brown-nosing the Canada Council (unsuccessfull, we might add), we'd like to send out a thanks to her home in Barbados, where she buggered off with our cash.

Also Scott, who took time from his busy schedule of nose picking and cootey hunting to take some snaps, and without whose help the album might have been completed on schedule. We also musn't forget Geoff Butler, Newfoundland's finest button accordion player (whippety shit!) and Bern and Ray Penton, who were no help either.

Finally, we would like to thank our audiences, the largest collection of drink and drug-boggled turkeys, simpering masses of wantwits, bored to tears with National Enquirers and soap operas, who had nothing better to do than pay hard earned UIC benefits to listen to two self-indulgent, no talent shucksters insult what's left of their intelligence with garbage like this.

Have a Nice Day."

Kevin Blackmore and Lorne Elliott need no introduction. Simply put, Kevin is the funniest man in all of Newfoundland (and that's saying a lot!). He grew up in Gander, Newfoundland and now calls Glovertown home. He met Lorne Elliott shortly after finishing high school. In the mid 1980's, he formed Buddy Wasisname and the Other Fellers with Wayne Chaulk and Ray Johnson. They started out with their first vinyl recording in 1986 "Makin' For the Harbour", which was released on their own label, Third Wave Productions TWP A-1 / World Record Corp. WRC1-4525. 16 more albums would follow, making them the most successful Canadian comedy act ever in the history of Canada.

Lorne Elliott, born in Montréal, Québec is a humorist, playright, has appeared on dozens of television shows and has released three comedy albums to his credit.

Free Beer performed and recorded for just a short while, but what a two pairs of nuts they were together.
-Robert Williston