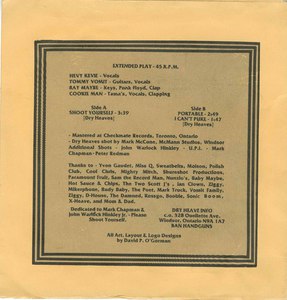 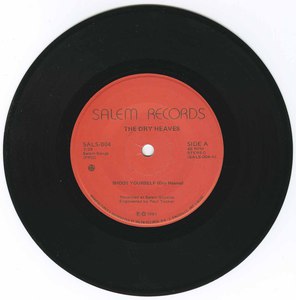 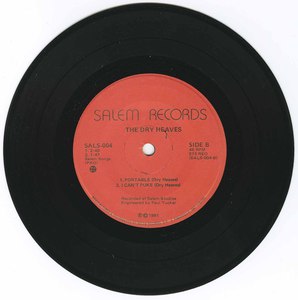 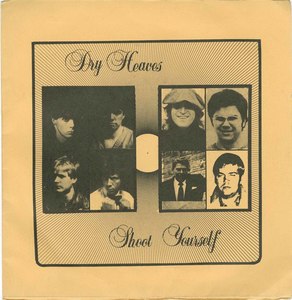 Bored, as the punk cliche goes, brothers Hevy Kevie and Tommy Vomit, along with Ray Maybe and two others decided to enter Windsor (Ontario)'s popular Battle of the Bands contest in 1979, dubbing themselves Dry Heaves, and performing a handful of hastily scribed originals and some Stooges covers to a thousand bewildered metal fans. Though barely able to play their instruments (to further the cliche), they managed a surprise second-place finish, launching the legend of Windsor's most notorious punk band. After over a year spent gigging locally (including at Detroit's mythical Bookie's club), they entered Salem Studios, recording thirty or so tracks, from which Shoot Yourself was culled.

A newer song in the band's repertoire, and topical at the time, 'Shoot Yourself' is a plodding beast, veering at times from the band's typically taut, frenetic punk, with singer Hevy Kevie imploring, in his best Rottenesque scowl, would-be and actual assassins John Hinckley and Mark Chapman to promptly off themselves ("Your gun could save us a lot of pain / if you just put a bullet in your brain"). The flip side sticks to the bones and is infinitely better for that. 'Portable' and the band's signature song 'I Can't Puke' leap out from the vinyl - as punk should - and virtually maul the listener with razor-sharp riffs. This record's value has been climbing in collector's circles of late and it is no doubt for these two gems.

Though Dry Heaves disbanded shortly after the release of Shoot Yourself, more recent interest overseas and the occasional reunion bash (again, the cliche) led to a spate of full-length releases, including an outtake collection from the original Salem session, Shoot Yourself LP (2000), as well as some more recent live offerings on CD.
-Michael Panontin
Visit Michale's site here: http://www.canuckistanmusic.com/index.php?maid=111