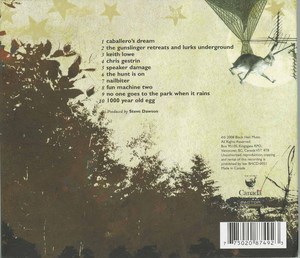 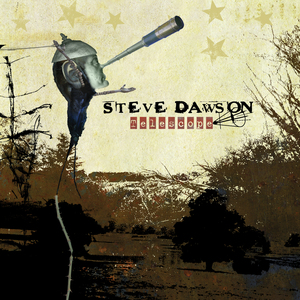 "Leave it to award-winning Canadian producer and guitarist Steve Dawson to plunge the pedal steel front and centre as the lead in the world of jazz and rock music. Telescope echoes the influence of ubiquitous pedal steel player Greg Leisz, who Dawson studied with in 2005. Shades of Daniel Lanois can be heard in the way the pedal steel plunges into murky, dark experimental waters." - FFWD Magazine

The second album in the series, “Telescope”, is an all-instrumental release written primarily on, and based around the pedal steel guitar. Steve set out to create music that was a showcase for the voice of the pedal steel, a complex form of slide guitar with a series of foot pedals and knee levers that raise or lower the pitches of the individual 10 strings.

“Telescope” has been in the works since 2005, when Steve received a grant from the Canada Council For The Arts to study the pedal steel guitar with Greg Leisz, one of the most influential, not to mention one of the most recorded steel players in modern recorded music. Steve spent time working with Greg in short spurts over the next 2 years and during this intensive period, began writing music for the steel guitar. “Most people know the pedal steel as a country instrument, but I wanted to write music for it that was outside that genre… so these tunes started coming together and I thought it would be fun to try it with this group of musicians” says Dawson.

The result is a beautifully unique instrumental album that emphasizes melody and interplay, displaying healthy doses of both structure and improvisation. “Some of the songs, like ‘Caballero’s Dream’ were planned out entirely, while others like ‘Speaker Damage’ were left more open for the musicians. “on that one, I had the rhythm section playing to a recorded loop that I created that had nothing to do with the final song. I wanted to experiment with the idea of having the drummer and bass player reacting to something that you don’t actually hear in the finished piece. The title comes from a really cheap distortion pedal I have that emulates a broken speaker. It got a lot of use on that track!”

“’Fun Machine Two’ is the sequel to a tune from my last album, both of which were written using a cheesy organ called the Fun Machine. It’s got some great drum moments care of Scott Amendola who I really encouraged to let loose and release his inner John Bonham. He was playing so loud that all the studio equipment was peaking out, but I loved the sound, so we left it like that”.

“‘Nailbiter’ is a fun song that I wanted to get really unique sounds on, so we recorded the drums from quite far away, and the piano sounded too much like a piano, so I dumped a case of blank CD’s onto the strings to deaden them, but they ended up jingling around when the notes were hit. I loved that sound too – sort of like an old tack piano. Now that’s productive use of digital technology!”.

“… I’m not a flashy player in the traditional sense, and I didn’t want this record to be a showcase for over-the-top pyrotchnics. It’s more about the feel, the tones and the mood that the steel guitar can conjure up... ”

“At the time I was writing this music I was very inspired by Tom Verlaine, Bill Frisell, Brian Eno, and Japancakes…” says Dawson “…and the way they use repetition and tone to create a mood. Some of these new songs have quite long melodies, which I think is a product of listening to that kind of music. At the same time, I was reading a book about recording the Beatles, and revisiting their music - that manifests itself in the way we recorded some of the instruments… particularly the drums, which are all recorded in mono, with only three microphones, and the steel and other guitars were all recorded exactly as you hear them – without adding any effects in the mixing process.”

Working with a recurring cast of musicians has honed the sound of Steve’s recording work to the point where he has become a recognizable and prominent producer of many current artists working around the world. In the last few years, Steve has worked in the studio with artists like Jim Byrnes, Kelly Joe Phelps, The Sojourners, Ndidi Onukwulu, Jenny Whiteley, Old Man Luedecke and many others. While individual projects vary in sound, the signatures of Steve’s production come through, such as the elements of live performance that he keeps at the heart of his recordings, and the tones of the old and unusual instruments that he collects. His go-to list of textural instruments include the pump organ, marxophone, mandotar, tack piano, and a growing collection of oddball guitars and microphones. Steve uses these tools to create soundscapes of unusual yet timeless sounds.

“Telescope” is a unique page in the career of Steve Dawson, and a refreshing blast of spir