Cuff the Duke - Way Down Here 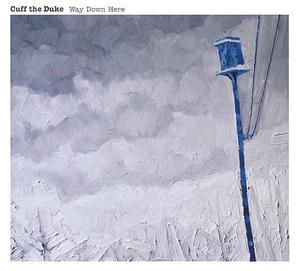 Rock has certainly evolved a great deal since the 1970s and '80s, but the more things change in rock, the more they stay the same. So inevitably, there will be artists who get much of their creative and artistic inspiration from rock's past, ... Full Descriptionwhich is what Cuff the Duke do on Way Down Here. This is an early 2009 recording from a band that didn't exist before 2001, but Way Down Here leaves no doubt that Cuff the Duke's roots run deep. There is no shortage of '60s, '70s, and '80s influences here -- influences (either direct or indirect) that include Neil Young, Blue Rodeo (not surprising given Cuff the Duke's Blue Rodeo connection), Bob Dylan, the Byrds, and Buffalo Springfield. One can characterize Way Down Here as roots rock, indie rock, jangle pop, and -- on occasion -- alternative country-rock. These Canadians aren't country purists or hardcore honky tonkers by any stretch of the imagination; they aren't pretending to be Buck Owens, Hank Snow, or George Jones. But they are country-influenced -- at least some of the time. And however one categorizes their work, they bring an attractive sense of songcraft to melodic, unassuming tracks such as "Old Photograph," "The Words You Ignore," "Another Day in Purgatory," and "You Were Right." Cuff the Duke are reflective and subtle; they don't beat listeners over the head in order to get their emotional points across, but they get them across just the same. And while Way Down Here isn't quite exceptional, it is a solid and appealing example of the inspiration that Cuff the Duke get from rock's past. ~ Alex Henderson