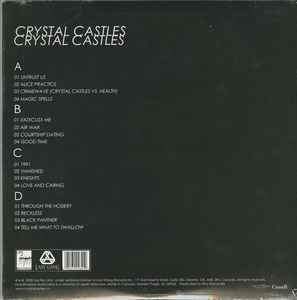 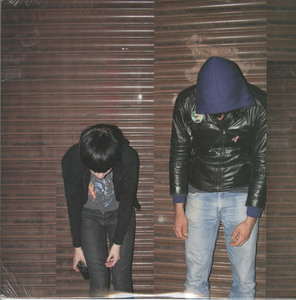 In-demand remixers with an armful of much-loved singles, the hotly-tipped and hotly-contested Crystal Castles don't stay in one place for too long on their debut LP.

Crystal Castles prefer traveling light. While the hotly-tipped and already hotly-contested Toronto duo's basement party set-up doesn't look like it'll fill up the passenger seat on a tour van, they also like to play fast and loose with their associations. They've remixed at a Hot Chip-like pace for everyone from Bloc Party to Uffie to Klaxons, but they're not a part of your nu-rave genre (really, who is?), or blog house for that matter. Their debut LP partly picks from 7" and 12"s that have been available in some format since 2005, and it's every bit as difficult to pin down.

The lead track samples DFA 1979's "Dead Womb" and places those vocals atop a cyclical synth loop while they get disembodied and chopped up-- both function as song-length hooks. But the thing's called "Untrust Us" (natch) and by the next one, they're making good on that claim. "Alice Practice" absolutely sears with megaphoned (emphasis on mega) barking and Ethan Fawn's Atari-laced keyboards going on the fritz and racking up free plays. Ah, so this is what an arcade fire sounds like.

They don't stay in one place for too long, but the body of the album can be distilled to an essence of the glassy, ten-lane stare of Last Exit with Ed Banger's egg-frying EQ. Well, except when it sounds more like "Alice Practice" ("Xxzcuzx Me" and "Knights" are a bit interchangeable in their diminishing returns). Whether it's a thank you or challenge to everyone they've worked with, Crystal Castles opens up endless remix possibilities. Though hardly minimal, there's plenty to easily pick apart and work with-- "Good Time" is a veritable toybox with undulating octaves, an almost Eastern-sounding riff and tweaked nice-guy vocals which combine the Knife and New Order. Even if you can't really make out the words, the call-and-response chant of "Courtship Dating" glows amidst fizzy synths and Triple 6 drum clicks. And "Crimewave (Crystal Castles vs. HEALTH)", is a collaboration with the LA noisemongers that builds from now-retro electroclash to a clattering mix of drums.

Just when you think you've gotten your paragraph-long blurb ready for the internet's approval, the last two tracks offer a bait and switch; the mad dash of "Black Panther" is probably what nu-rave was supposed to sound like (the Goth! Team?), and then the record ends on a disquietingly beautiful shoegaze comedown played on an acoustic guitar of all things ("Tell Me What to Swallow"). That they play such hide and seek musically should've come as no surprise anyway; despite the fact that there's literally an Atari game named "Crystal Castles", they named themselves after a She-Ra playset, which is like finding out LeBron James chose to wear uniform number at #23 as a tribute to his favorite Jimmy Eat World song. Then again, it's fitting for a record that draws so much of its power from unpredictability.
-Ian Cohen, pitchfork