Crystal Castles is a Canadian electronic experimental band formed in 2004 in Toronto consisting of producer Ethan Kath and vocalist Alice Glass. The duo is known for their chaotic live shows and lo-fi melancholic homemade productions. They released many limited vinyl EPs between 2006 and 2007.

In 2006, their first single/EP "Alice Practice" was released on vinyl. The release was limited to only 300 copies. "Alice Practice" would later be included on their debut album, released in 2008. Other singles from the album include "Crimewave", "Air War", "Courtship Dating" and "Vanished". The album received highly positive reviews and was listed on NME's "Top 100 Greatest Albums of the Decade" list at No. 39.

In 2010, they announced their sophomore album after they released their first studio EP, Celestica/Doe Deer. The album was their first release to chart on the Billboard Hot 100, and includes their first worldwide charting single, "Not In Love" featuring Robert Smith of The Cure. They re-released the album in 2011 as (II). The album has received general acclaim and was placed on many 2010 top critics lists.

Their third album was released on November 12, 2012. Three singles have been released: "Plague", "Wrath of God", and "Affection".

Ethan Kath met Alice Glass in Toronto when she was 15. He thought he had found an "undiscovered poet" after hearing her sing in her punk band Fetus Fatale. Kath asked her to record vocals over tracks he had been working on since 2003. After writing lyrics for 5 tracks, she went to a studio to record them, where an engineer secretly recorded her soundcheck. Kath discovered the secret soundcheck recording, named it "Alice Practice," and uploaded it online under the band name Crystal Castles, a line from the cartoon She-Ra that stated "The fate of the world is safe in the Crystal Castle." The duo has also taken inspiration from the 1983 Atari arcade game of the same name. In 2005 the songs "Magic Spells", "Untrust Us", and "Alice Practice" grew popular online, and he began receiving offers from record labels. This news was especially shocking to Glass, having lost touch with Kath since the recording and up to that point unaware "Alice Practice" even existed. The song became the band's first official release in 2006 on a limited vinyl which was released by London's Merok Records. Their highest-charting single "Not In Love" is also featured in the "FIFA 12" soundtrack. 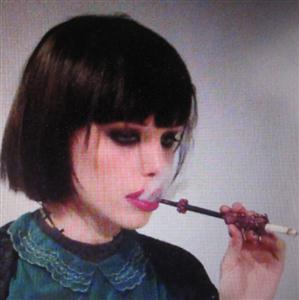