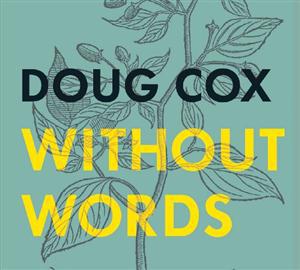 Doug Cox approaches the Dobro as an undiscovered instrument and explores its potential as if he had just been given the very first prototype. Unafraid to fuse Classical elements with both Eastern and Western influences, bluegrass, pop, jazz and what you might possibly expect to hear on Mars, Cox handles each investigation with a sensitive touch and precise execution. Like most of us, Doug Cox first heard Jerry Douglas over twenty years ago and was instantly aware of the potential of using the Dobro as much more than an instrumental fill-in, but as a bone-fide lead instrument in its own right.

On WITHOUT WORDS, Cox hand picks some of his previously recorded work and presents the thirteen pieces as a compact package of instrumental gems, some self-written, some by others, but each in this context very much his own. While My Guitar Gently Weeps borrows from the original acoustic demo of the song George subsequently chose to rock-up with Clapton for the glorious WHITE ALBUM. It sounds pretty much like Union Station emoting sublimely in between takes, whilst Alison gives her tonsils a break. A gorgeous version of one of the Fab's most underrated tunes.

Tackling Duke Ellington on a modified guitar and metal slide would in other hands possibly be reduced to novelty value only, but with the dexterous handling of Caravan as a bluegrass number challenging the old jazz guard in a sort of feuding banjos manner, is nothing short of inspired. The strangled cornet solo, courtesy of Daniel Lapp, comes across as a duel of sorts between Western music of two distinctly original styles. Joe Zawinul's Birdland again boasts a valid relationship between jazz and bluegrass, with some delightful musical syncopation between Doug's Rayco Resophonic and Sam Hurrie's guitar.

The Indian Classical music influenced Letter Home shows the remarkable relationship between the Dobro, a typically Western instrument and the Indian version of the slide guitar, the Satvik Veena, played here by its creator and leading exponent Salil Bhatt. As a meditative piece of resonant music, complete with tabla, we find Cox comfortably engaging in a musical experience a world away from bluegrass, but strangely fitting in with it dove-tail like.

The Circle Game reminds us once again what a beautiful melody Joni Mitchell's song has, even without the words. Try though as I will, I cannot help singing along to it. It's strange to have an entirely instrumental album with so many fine words.

For newcomers to Doug Cox's music, Without Words offers a fine introduction to the instrumental side of his recorded output, covering his collaborations with Todd Butler, Sam Hurrie, Salil Bhatt and on the George Harrison song, one other local hero, Clive Gregson.