Not so long ago and not so far away, near the mountains in a place the Canadians call Alberta, a young man fell in love with the blues. Bottleneck slide blues, to be precise, maybe the most soulful and haunting music to ever come out of black life in the Deep South.

Slide is all about the notes between the notes, the ones just this or that side of the frets that hold so many kinds of music together. It’s an ancient thing, going back thousands of years in India and it’s a familiar thing, something we hear in the cello, the violin, the oud and the voice of a great singer.

As fate would have it, one night that young bluesman saw Jerry Douglas play the Dobro and on that night everything changed. The next morning, he went out and bought a Dobro, and started teaching himself how to play. Twenty years later, that Dobro is still on his lap and if you were to ask Doug Cox today, he’d tell you he’s still learning.

Depending on where and when you hear Doug these days, he might be sitting cross-legged with Indian slide guitarist Salil Bhatt and a tabla player, creating an intricate musical dialogue that weaves centuries of tradition into something contemporary and beautiful.

He could be on a stage from Spain to the Southern States with Californian tunesmith and vocalist extraordinaire, Corinne West, performing songs with her from “The Promise”, her third album which they co-produced this year.

Or, teaching someone something new on the Dobro at a music camp in Alaska, or adding a couple of tracks to someone else’s record, or out on the road with friends like Steve Dawson and Jim Byrnes or a long-time mentor and road buddy like Amos Garrett.

One doesn’t find ones’ self in such esteemed musical company without some serious chops, and Doug’s got those - on the Dobro, for sure, and also on the guitar, the mandolin, the Weissenborn and the National Steel. Less often remarked upon, but every bit as important is the fact that Doug Cox has 'big' ears.

Everybody says so – newspapers like the Toronto Daily Star and the Boston Globe, music magazines like Folk Roots, Guitar Player and Acoustic Guitar, national broadcasters like Jurgen Goethe and all kinds of other folks. They use words like ‘brilliant’, ‘stunning’, ‘ground-breaking’, ‘virtuoso’ and ‘a musician’s musician’, but it adds up to the same thing. His journey is worth watching.

Musically, he covers the waterfront, the wild mountain thyme and well up the valley. From Blues to New Acoustic Music to World Music and Americana, Doug has made music with the likes of people from the late iconic British Blues master Long John Baldry to India's musical royalty Vishwa Mohan Bhatt, from America's great songwriters like Corinne West and Chuck Brodsky to Austrian Dub band Dubblestandart. as well as dozens of other musical admirers.

Doug's music has been featured in many soundtracks and movies from documentaries to feature films such as Terry Gilliam's 'Tideland.' He even earns a cameo appearance (as Doc Coggs) next to Amos Garrett in the Sci-Fi Robert Heinlien/Spider Robinson novel 'Variable Star!'

In a musical combination, or as a solo artist, Doug’s played every major roots music festival in Canada – usually more than once- as well as many of the fascinating ones a little further off the beaten track.

He’s played for ship sinkings in Victoria, BC (where they sink old ships for underwater diving adventures) and at the Baseball Hall of Fame in Cooperstown, New York. He's busked on airplanes (back in the day when that was allowed!) and played for Prime Ministers. He was the first featured Dobro player ever booked by the Montreal Jazz Festival, and the first Canadian invited to play Dobrofest in Trnava, Slovakia where people gather each year to celebrate the instrument's inventor's birthplace.

He’s taught at music camps from Kerrville, Texas to the Cotswalds in England, to Fairbanks, Alaska. The demand for his teaching abilities led him to create 8 educational books and DVDs. The great response to these led him to start a company called “Learn RootsMusic.Com” with a buddy of his, Chris Manuel. They’ve now created more than 35 titles and their catalogue is distributed internationally by Mel Bay Publications.

Doug’s approach to touring and performing live is also informed by a solid understanding of the realities facing presenters. Over the last 20 years, he’s presented hundreds of successful concerts with other musicians.

In turn, he’s applied all this experience to become one of Canada’s most respected music festival programmers and in 2007, he was chosen by Canada’s National Art Centre in Ottawa to create the programming for their celebration of music in British Columbia.

Doug’s worked hard on his art and his craft, and you can hear it when he plays. You can also see it, in the names of the artists he’s making music with and the places he’s played and when you read between those lines, you know he’s earned the respect of his peers and a lot of very happy listeners. What a long, strange trip it's been.

Life Is So Peculiar 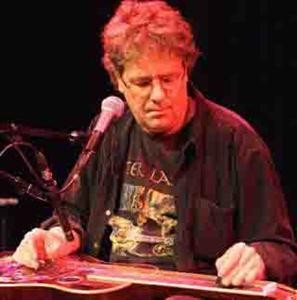