Ceramic Hello - The Absence of a Canary 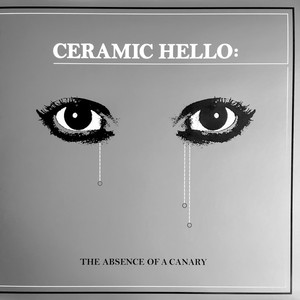 The Absence of a Canary

Ceramic Hello was a duo from Burlington, Ontario, formed by Brett Wickens in 1980 after leaving Spoons to start Mannequin Records. He teamed up with Roger Humphreys who added a more classical bent to the minimal synth tunes (in the mold of John Foxx and Mute Records).

Their first release was the single "Climatic Nouveaux" / "Theatre Matrix" (MAN003) in 1980. This was followed the next year by the vinyl album The Absence Of A Canary (MAN LP1), which included the single a-side. The 1000 copies have become a collector's item, so much so that in 2006 the German label Vinyl On Demand produced a two disc re-issue, named The Absence Of A Canary V1.1. The original LP has has sold on eBay for up to US$350.

The first two sides consist of the album as originally issued. Sides C and D contain instrumental demos Wickens prepared while in England for a never-issued second album (recorded between 1981 and 1984). Additionally "Theatre Matrix", one track from a Wickens solo 12" ("Between Two Frequencies") and a song from the collaboration The Partnership ("Sampling The Blast Furnace") were included. The version of Sampling The Blast Furnace that is included on The Absence Of A Canary V1.1 is an 8-track demo recorded in the demo studio run by William Orbit in London called Classic Cat, before he went on to form Torch Song and his own illustrious career. William also produced a 24-track version of the track with Andy McCluskey from OMD on vocals, which was never commercially released due to contractual issues with Virgin Records.

Currently Brett Wickens and Roger Humphreys have re-united and are working on a new album, with the working title Daisy Cutter.

Brett Wickens lives in California and is the Creative Director of the highly-influential design firm MetaDesign. Brett's design career paralleled his musical career in the 1980s when he was in partnership with Peter Saville, and designed dozens of seminal LP covers for bands such as New Order, Joy Division, Ultravox and others.