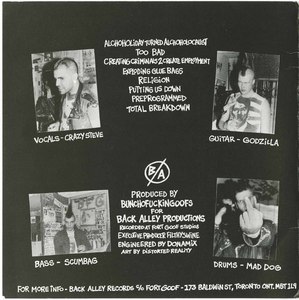 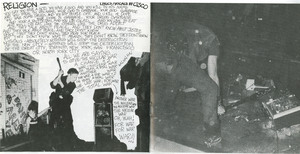 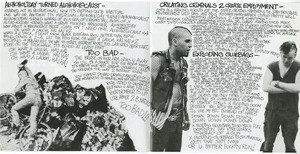 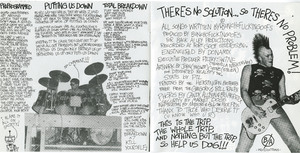 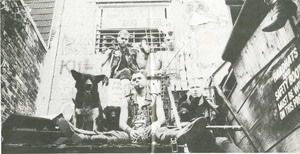 45-Bunchofuckingoofs - Theres No Solutions So Theres No Problem INSERT 01 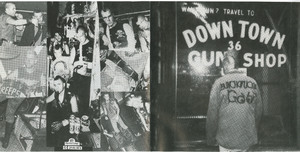 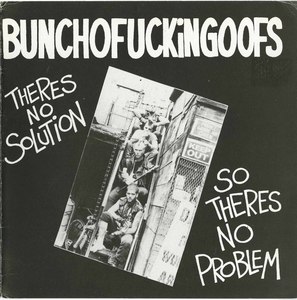 Theres No Solution So Theres No Problem (EP) (picture sleeve)

When I was a kid, there used to be an advertisement that always played on TV by a group called Concerned Children’s Advertisers that featured a bunch of kids doing their “thing”, informing us that, “everyone has a thing, what’s your thing?” If Toronto punk legends BFG, or Bunchofuckingoofs were in this video, it’s likely that playing in a band or making music would not be highlighted as their thing. This is because of all of the things BFG did, making music was probably the thing they were worst at. Instead, BFG was incredibly skillful and drinking beer, and most other kinds of alcoholic beverages as I understand. They were also remarkably talented at beating up Nazis, and are credited as the reason the Toronto scene no longer has to deal with fascist boneheads at shows. BFG started in 1983 more as a local gang to beat up Nazi skinheads in Kensington Market than to make music. Between 1983 and 1988 they ran Fort Goof, a bike shop, punk house, venue, and boozecan which I’ve been told was in the basement of the LCBO at Spadina and Baldwin. Even after moving out of the Fort, BFG has created a loyal crew of drunk market punks that still kick around today. BFG supposedly played their last show in 2011 but they’ll probably be back. There’s No Solution… is not an excellent record by any means, but has become something of a collector’s item due to the BFG’s legendary status. It’s also the only double 7” ever put out by a Toronto punk band.