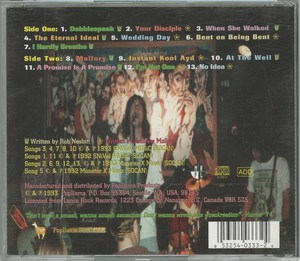 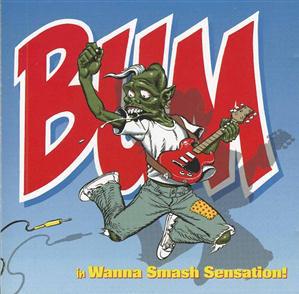 In the 1990s I became aware of an album by a Canadian band called Bum. The recommendation was made by Alan Woods, the head honcho of the excellent Alans record/skateboard shop in Wigan who frequently pointed me in the direction of bands peddling melodic punk (he was the guy who gave me a nod in the direction of a young trio called Green Day’s first album in 1990) and his choices were often ignored at one’s own peril!

At the time I was heavily influenced by those bands whose music was deemed to be of the pop-punk variety alongside the aforementioned Berkeley-based band, and that would be the likes of Monsula and the Mr. T Experience. Add to these a handful of UK bands going down the same route such as Funbug, Mega City Four and the Senseless Things, and it’s fair to say I was hooked on the genre. Therefore, it was with open arms that I received the package with Bum’s debut (and only) studio album.

Heavy in guitar and melody, there is something remarkable that strikes me when listening to this album today: It easily reminds me of the mid-1990s when melodic punk was so prevalent and becoming more of a force in the music world, but it also stands the test of time, with the songs not sounding out of place getting on for 18 years down the line.

Despite being heavily pop-punk reliant, there is no getting away from the fact that the album is laced with nods towards the more pop-based genres of the late 1960s and early 1970s. Add in to this just the slightest hints of bands such as Redd Kross and even the Monkees (okay, that's maybe only me hearing that in there) and what you get is an enjoyable collection of songs. The most infectious of all them is “Instant Kool Ayd”, which has a bit of a garage pop feel to it with less of a clean sound in comparison to the majority of the songs on the record, enhancing its class and the level of gratification it provides. One of the main attractions of this band is that the record is not overproduced, nor could one ever argue that the vocals were always perfectly in tune, but that is nothing but a positive point. It has its flaws, but they’re not detrimental to the output created. I’d say they were a less sterile version of Bracket—another band who peddled pop-punk ditties, but one that lasted much longer than Bum.

Wanna Smash Sensation! hasn't lost any of its appeal, and whilst the band may never have achieved the popularity they deserved, Bum’s one release (there is a live album and a number of singles out there if you can find them) contained 13 tracks of good, quality pop-punk, perhaps with a bit more variety than other bands around at the time. Do you like Chixdiggit? If the answer is “yes,” then check out Bum—the Canadians know how to produce decent pop-punk.
Rich27, punknews.org

Recorded at Egg Studio, Seattle, Washington, USA
by Mark Guentler and Kurt Bloch on
May, Oct, and Nov, 1992
Produced and mixed by Kurt Bloch (with a little help from Rob)

Additional Musicians:
Richard Peterson: trumpet on "Bent On Being Bent"
Fink: lead guitar on "No Idea"
The Gun Sharp'ners: backing vocals on "No Idea"