Bum formed in Victoria, B.C. in 1990. The original line-up consisted of Kevin Lee on bass, Jamie Fulton on drums, Rob Nesbitt on guitar and vocals and Andrew Molloy on guitar and vocals. They released a number of singles through '91 and '92 and recorded their only full-length studio album, 'Wanna Smash Sensation', with new drummer Graham Watson in the Spring and Fall of '92. It was released on Seattle's Popllama Records in the Spring of '93. It also received a Spanish release (Munster Records) and a Japanese release (1 + 2 Records).

The band toured Canada and the U.S. west coast in the summer of '93 and entered the studio again in the Fall of that year. The resulting recordings yielded more singles and a mini-lp, ' I Am Superwoman ', ( Munster again in Spain and Au-Go-Go in Australia ) which coincided with their first Spanish tour in the Spring of '94. The Madrid show on that tour was recorded and the live album, ' Shaketown ', was released on the Impossible label. Rob Nesbitt left the band following that tour and Graham Watson followed suit a couple of months later. Molloy and Lee recruited Nick Thomas ( Smugglers, Tranzmitors ) and Terry Russell ( Slow, Tankhog ) and returned to Spain in the Spring of '95, having released another mini-lp, ' Make It or Break It ' on the Spanish Impossible label. They played their last show in December '95. The line-up of Lee, Molloy, Nesbitt and Watson, along with Thomas re-convened in '98 to record a couple of songs which were released as a single on the Magic Teeth label. The same label released a BUM tribute album in 2002 which included contributions from bands from Canada, the U.S., Australia, Japan and Spain. Molloy now fronts the band Budokan, who recently welcomed Watson as " interim " drummer for a Nanaimo gig and hopefully future recording. Nesbitt is in the Victoria hardcore band AK-47 and Lee is, at present, retired from playing live.

NAME: Jamie Fulton
JOB: Drums (up to and including first single)
POST-BUM BANDS: Pez, The Stupes, The AstroZombies

A Promise Is A Promise b/w Wedding Day

Make It or Break It

Mrs. Rock and Roll b/w I Won't Look Back

A Promise Is A Promise b/w Wedding Day

Lift Up Your Hood split (Tattoo Dave) (split with The Smugglers) 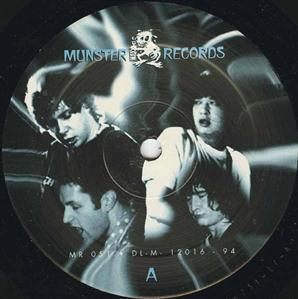