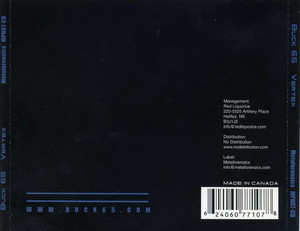 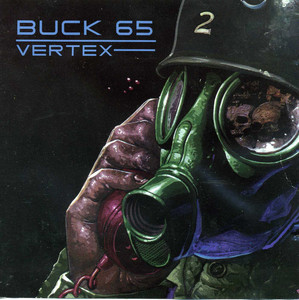 Vertex is an album from Halifax, Nova Scotia hip hop artist Richard Terfry, who performs as Buck 65. The album was originally released on cassette and was 90 minutes long, containing 20 more minutes of mostly instrumental music that was left off of the Warner version.

Many critics believe that Vertex is Terfry’s best work. Many people were largely influenced by this album. Sage Francis himself even admitted that it changed his views on rap music. Also, many of Buck's fans praise the album as pure, classic hip-hop.

"The Centaur", possibly Buck 65's most well-known track, features on this album. It is an irony-laden piece that can be taken many ways, the most obvious one being a literal flow of prose discussing the consternation of a well-endowed man who just wants to be taken seriously, arguing that he has a "complicated mind" and is just "looking for true love". The piece is full of crude imagery, a relatively common theme in Terfry's early work:

People are afraid of me but act like they love me,
Feast your eyes upon my nudity, I am beauty and the beast.
I have plenty to say but nobody listens,
Because my cock is so big and the end of it glistens.

The track has developed a considerable cult following, and is always requested at live shows. To date, Terfry has produced two more versions of the track: a drum and bass version on Synesthesia and an acoustic, cleaned-up version on This Right Here is Buck 65, an album designed to appeal more to his American fans.

Vertex also continues to explore the theme of typical American life that is prevalent throughout most of his career. The blues tracks (Parts 1 to 3) all deal with the game of baseball, and techniques involved, while Supper At Sundown and BSc., both towards the end of the album, deal with more serious themes. The latter track suggests a growing maturity both in Terfry’s music and his life ethics, preferring religion to getting stoned: I’d rather read the bible than use its pages to roll joints with