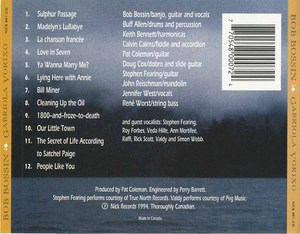 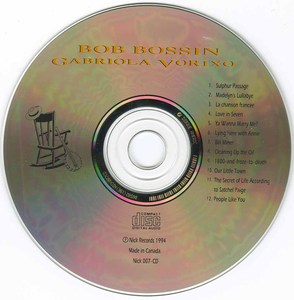 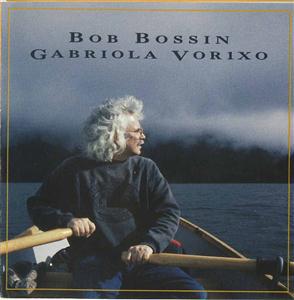 It took me more than a moment to decide how to pronounce the title of this album the first night I played it on the radio. I wondered about the second word of the title, but after a very long pause, I remembered that Bob hails from British Columbia and that the second word is the postal code for the island he lives on. So without undo embarrassment, I let go with the first track, "Sulphur Passage," and for the next four minutes sat there stunned by one of the most brilliant and wonderful rallying songs I'd heard in more than a decade.

At 50, Bob Bossin refers to himself as "Old Folksinger," and to be truthful, he has been around for quite a long time. If you haven't been paying attention in recent years you could have imagined that he was just starting his career, but he's actually been around as long as fellow Canadian Gordon Lightfoot. Gabriola V0R1X0 is his first album in fifteen years and is the product not only of a folk-music master but also of the angels -- hundreds, perhaps thousands of them -- who helped Bob secure the funding to produce it. The details of how it all happened are carefully documented in March/April, 1996, issue of Sing Out! if you want to know more. But that is truly another story.

There are many good songs, but I can mention only a few. The opening track, "Sulphur Passage," still gives me chills several months after first hearing it. Borrowing the rallying cry "No Pasaran" from the Spanish Civil War, the song recounts the 1988 Clayoquot logging blockade. The vocalists on this track include Roy Forbes, Veda Hille, Ann Mortifee, Raffi, Rich Scott, Valdy, Jennifer West, and Bob Bossin. "Ya Wanna Marry Me?" was a song sung at Bob's wedding -- and rather well received, we understand. "Lying Here With Annie" is set to a traditional Scots tune and depicts life on Gabriola Island. Bob does a fine rendition of Pete Sutherland's "1800-and-froze-to-death," and he covers Greg Brown's "Our Little Town" quite capably. "The Secret of Life According to Satchel Paige," about the man who many feel was the greatest pitcher of all time, was written not long after Paige's death in 1982. The album closes with Si Kahn's "People Like You," a song that Bob often uses as an encore and one he says seems to work pretty well right here. I agree.

People have called Bob Bossin many things. Gary Cristall refers to him as the "Clint Eastwood of Canadian folk music." Pete Seeger says he's "funny, informative, and inspiring," and Ros Larman says "Bob Bossin is among the quirkiest, most unpredictable, funniest, and most respected of Canadian folk composers."

Gabriola V0R1X0 is without a doubt a very fine album, created by Bossin and a host of talented musicians. This is a work that you'll want to hear. Though well past the midpoint of his musical career, Bob has produced an album that speaks of life and love, energy and strength. It is a call to renewal in some sense -- and a look ahead. Bob Bossin, Old Folksinger, has created a work of art.
-Geoffrey Huys
-edited by Paul Yamashita