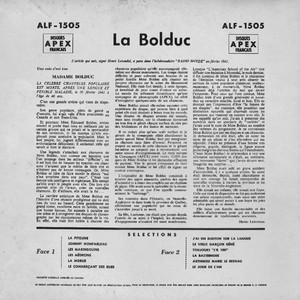 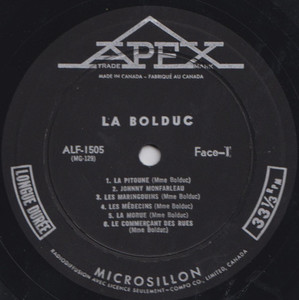 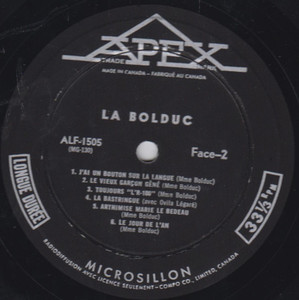 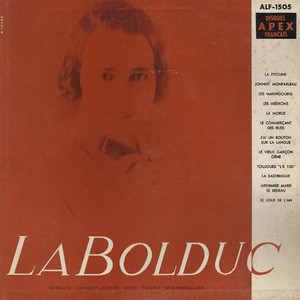 The Great Depression tested the endurance of working men and women. Despite those hard times, Mary Travers-Bolduc made ordinary people like herself laugh with her witty songs of everyday life in the 1930's.

Mary learned the realities of poverty growing up in the Gaspé region, where unemployment was common. Irish on her father’s side, with a French-Canadian mother, Mary was a sturdy, curious, and lively child who attended school only briefly. Fluently bilingual, she learned how to sing and play the accordion, fiddle, and harmonica to brighten the evenings spent with neighbours. She usually played Irish reels, which she intertwined with "turlutes", Acadian mouth music. Without knowing it, young Mary Travers was laying the fondations of the Québec "chanson".

At 13 years of age, in 1907, Mary left for montreal to relieve the financial burden on her family. In Canada’s francophone metropolis, the village girl discovered a hectic and raucous 20th century. The shock of leaving home and her initiation to the big city would later translate into song:

The countryside, I left,
To Montreal. I did go.
I tell you, it wasn’t long,
Before I met a fine young beau.

For a few years, mary worked as a housekeeper, then as a labourer in a textile mill, making terrible wages for workdays that lasted as long as 13 hours. Through it all, Mary retained her strong will to succed and cheerful disposition, qualities that won the admiration of Édouard Bolduc. The couple married in 1914. They struggled to claimed young lives. The Bolducs tried to stay one step ahead of disaster by moving every two years, and even fled to New England for a year in search of work. Their life began to stabilize in 1924, and the four surviving children (out of 13!) grew up in a typical French-Canadian home. Mary’s life revolved around her family, but she was an amused observer of the countless little details of daily working-class life, which she would later weave together in her songs.

In the laneways passed The Street Vendor:

With the arrival of springtime
He began to chime:
"Come see my shallots,
Just ten cents fills your boots."

She cautioned about The Corner Grocery Store:

watch close when they weigh your meat,
Sometimes they’ll try to cheat,
To create a distraction,
They tell us a little yarn.

Landlords, insurance agents, doctors, drivers, policemen, and mothers-in-law, none escaped her mocking eye. She also noticed how girls were changing:"...bare legs, short hair, pants, they look just like boys." For her children, she invented ritornellos peppered with mouth music, akin to the songs she was on the eve of writing.

Madame Bolduc's career as a popular singer began with festive musical evenings among friends from the Gaspé. Her musical friends were soon impressed by Mary's talent and the exuberant spirit that emerged when she played and sang. Then one day, when Édouard once again faced unemployment, Mary seized on the opportunity to replace a fiddle player in the "Veillées du Bon Vieux Temps," a popular folklore show. The audience liked her jigs on the fiddle, jews-harp, and spoons, and one evening, when she ventured to sing a refrain in her clear voice, there were calls for an encore!

Through the generosity of fellow musicians, Mary Bolduc quickly learned her trade and began to compose melodies. Radio broadcasts spread her reputation. The budding author-composer had never dared dream of a career when, in 1929, the head of Starr records offered her a contract for five 78" records.

Those early efforts differed little from the traditional folk songs she had broadcast over the radio. Then, on October 29, the New York Stock Market Crash set off the Great Depression. As grinding poverty again entered her life, Mary wrote new songs with simple and direct lyrics that spoke to the common people of the trying ordeals everyone faced. With uncommon audacity for a woman of that time, she adopted a humorous and mocking tone.

Her first big hit, La Cuisinière (The Cook), charmed the mothers of large families and the factory workers who still preferred humour and hope to the fatalism of other singers. By 1930, she was expected to produce one record a month. Her on-stage appearances increased and, as the unemployment rate rose, she became the voice of courage. She spoke directly to the audience, with whom she identified:

She described the changing world: the new R- 100 dirigible, the Dionne quintuplets, the Lindberg baby kidnaping, Roosevelt's New Deal, Hitler. With growing assurance, she took on the governments of Québec and Canada, denounced poverty and unemployment, and advocated respect for tradition and work. Her stance on the status of women, however, was more traditional. Independent herself, she demanded more freedom for all women, but added:

For a household to get along,
requires a lot of prudence.
Let the wife wear the dress,
and the man, the pants.

The songs broadcast from Montreal generated such a demand that Mary and her troupe of entertainers began regular tours of Québec and New England. During one of these, in June 1937, she was involved in a serious traffic accident. When the doctor examined her injuries, he discovered a cancerous tumor. in the middle of this ultimate test, she gave into the temptation to relate in song The Sufferings from My Accident.

In 1941, the final curtain came down on the singer who was known simply as "La Bolduc." Her songs made her an idol to the underprivileged of her day; today they are touching a new audience of francophone Canadians rediscovering their musical heritage.