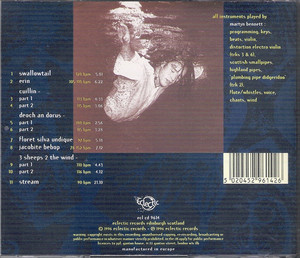 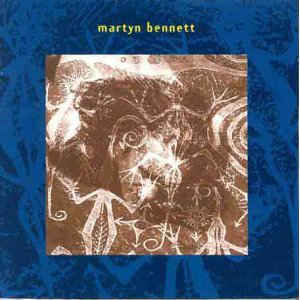 Written in Edinburgh in 1995, this self–titled album is my first venture into the world of electronica and cross-over. Prior to this, I had been involved with Martin Swan and had recorded a couple of tracks on his album Mouth Music.

As well listening to DJs in the Edinburgh club scene, working with Swan was probably the biggest initial influence for me. It gave me the insight I needed to explore technology and traditional music within the same grounds, but more importantly it was like a voice of consent - it gave me the courage to step forward with my own ideas in the knowledge that there was, at least, one person who understood my wish to graft two contrasting forms of music.

Recorded and mixed in just seven days, I listen to this album now with a hidden smile. Yes, I can hear the limitations of my knowledge of electronics and the small amount of equipment I had at my disposal, but this album, for me, is like a child. It’s full of fun and abandon. It does not care about the 'correctness' of the sounds or complexity of arrangement, it only cares about energy and light.