He was born to a family rooted in both the Island of Skye and Wales. He spent his formative years in the Cordroy Valley, Canada surrounded by Gaelic-speaking Scottish immigrants who had come from Canna and Moidart in the Northwest Highlands of Scotland in 1820. So it is ironic that the most concentrated source of his musical upbringing was absorbed some 2500 miles from its origin, which, for the most part, had become much diluted since the times of The Highland Clearances and the tragic aftermath of the Jacobite uprisings of 1690-1746. At age 19, he took to the peaking rave scene in Glasgow and began formulating what would become his signature hybrid of traditional Gaelic and modern house, hip-hop, and dance music. Martyn fused rural and urban music (rurban, urbal?), mixing classical styles with contemporary rhythms and technologies, and emerged with a sound which was unique yet familiar, and in high demand throughout Glasgow. After finding his niche in the Gaelic/dance arena, Martyn began garnering attention by composing for European theatrical productions. Beginning with the score for "The Haunting of Billy Marshall", Martyn composed for the Tom McGrath adaptation of Robert Louis Stevenson's "Kidnapped" and David Harrower's "Knives in Hens". These works led to television and movie scores and eventually on to solo performances, highlights of which include performing as personal piper for the Tanzanian President on his visit to Edinburgh, a three month tour of the U.S. with Green Linnet recording artist Wolfstone, consecutive appearances (in 1995 and 1996) at the Edinburgh Hogmanay for crowds of over 90,000 people (and a couple of sheep), and a gig as entertainer for the Braveheart premiere at Stirling Castle. In November 2000 Martyn was diagnosed with Hodgkin's Lymphona. Martyn Bennett died on January 30, 2005.

I was born on the 17th of February 1971 in St John’s, Newfoundland, Canada. My earliest memories of music are from the Gaelic-speaking farm communities in Cordroy Valley, in Western Newfoundland, and Milan and Scotstown in Quebec where I spent my first six years.

At the age of six my parents split up and I moved back to Scotland with my mother. At the age of ten we settled in Kingussie, Speyside where I met with my first instrument - the Great Highland Bagpipe. I was introduced to this, most magnificent instrument, by a fantastic guy named David Taylor (who was also my history teacher). Although I have had many lessons from great teachers I still consider David as my most important mentor. I can remember my first lesson well - holding the chanter, I felt like I had come across an old friend - no pun intended, honest!

By the age of twelve I was winning prizes in many of the junior piping competitions around Scotland, however I was really more interested in playing the folk scene. Being a young prodigy meant that I got a lot of attention at the folk festivals, as there were very few young musicians around at that time. It was also a total gas being snuck into the pubs under someone’s coat and getting the pipes out before anyone had noticed the under-age drinker. By the time I’d got through the first tune and the place was jumping they were hardly going to chuck me out were they?

It was at these festivals that I met with 'real' people. People who came from an oral tradition that had been passed down; folk like the travellers (Romany Gypsies), Gaelic singers and bards - all great musicians, storytellers and tradition bearers, of whom many are sadly no more. I’m aware that this is an experience that very few people of my age will ever know and one that I feel has been a privilege to pass on - see GRIT.

As ever, my mother had the itchy feet, and in 1986 at the age of 15 we had moved again to Edinburgh where I decided I would try for a scholarship at the Edinburgh City School of Music which had a unit attached to Broughton High School. Being a conservatoire for Classical music, there had never been a traditional musician admitted before, and the next three years were, without doubt, the most important three years of my life. It was at Broughton that I received lessons in composition, violin and piano, learned to read and write music and immersed myself in the surrounded energy of other highly talented and motivated young musicians. The amount of knowledge I gained in those three years was absolutely vital to my future career and the route which I would follow.

In 1990 I gained a place at the Royal Scottish Academy of Music & Drama (RSAMD) to study performance on the violin and piano. There I met a gorgeous gal by the name of Kirsten who played harpsichord - she lives with me now and is called Mrs Bennett.

My new violin teacher, a great character by the name of Miles Baster was a true classical musician. He was the first violinist of the Edinburgh Quartet, which he founded in 1968, and very much of the ‘old school’. Educated at Kings College Cambridge, and trained at the Julliard in New York he had a superb, plummy accent, rich tastes in wine and clothing, and a scary pedigree behind him that could be traced right back through all the great violinists - Persinger, Ysaye, Wieniawski , Massart, etc. It was a joy to study under him and I worked hard at fulfilling a dream that perhaps I might find myself playing in a professional ensemble or Quartet. Although I enjoyed the sheer power of the bigger orchestra I hoped to avoid the bind of rank and file session work and be able to express myself more freely.

During my time at the RSAMD I had worked hard on my technique as a violinist, but kept my traditional music going by way of the odd pub session. Nobody at the Academy knew that I played trad music (or the pipes for that matter) and it wasn’t until I left in 1994 that I began 'relearning' the fiddle. Techniques used in classical and trad music are, to the most part, incompatible, however it was useful to have unlimited recourses under the fingers and I began experimenting in the field of free-jazz and fusion. I bought a very basic keyboard (Ensoniq SQ1 for the techy-heads) with an on-board sequencer and began writing bits and pieces. However, it was not until I had saved up enough dosh to purchase a sampler and a small mixing desk that things started to get interesting.

In 1994 the ‘Summer of Love’ was in full swing. There were some fantastic sessions and underground stuff going on (anyone in Edinburgh at that time will remember Friday nights at Squid, Sativa, Slam or Club Latino and Mondays at Black Bo’s and Legends). I was really blown away by some of the DJ sets I heard and started to think about how I could get involved with that kind of music. I think for a classically trained composer, the dance world is such an attractive place as it encapsulates the same musical ethos. It is principally about sound and scale, tension and release, power and detail - much like the orchestral canvas perhaps. It is no wonder that many of us end up composing using technology. Drums and beats became the focus of my days and I spent a lot of time with my Atari and Roland S760 sampling Bull-dog Breaks and incorporating my first tunes.

In the spring of 1995, with backing from a small independent label in Edinburgh, I took my tiny home studio into Castlesound Studios in Pencaitland. I can’t believe now, when I listen to it, that Stuart Hamilton, the engineer, and I managed to record and mix an entire album in just seven days. Even though the limitations of my knowledge of technology and the equipment itself can be heard in that first album I think it has a spirit of the moment that I still love to this day.

Well the rest is history, as they say... 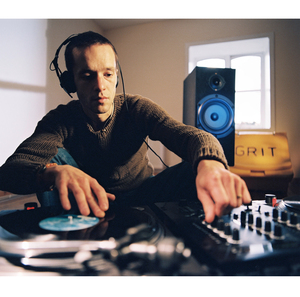