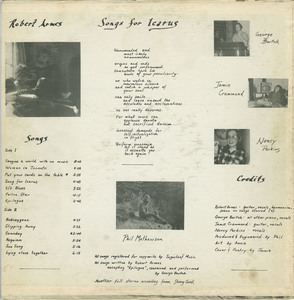 Robert Armes-Songs For Icarus BACK 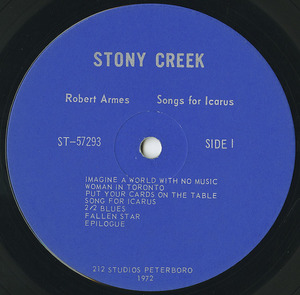 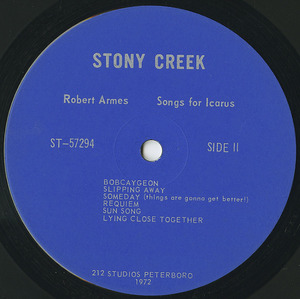 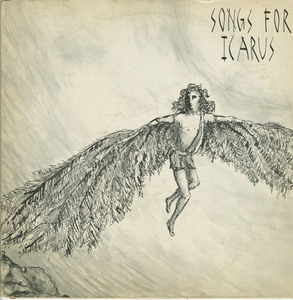 Robert Armes was born in 1953 and was based out of Toronto. Before urning 'pro', he played with a folk group in university. His training was in classical piano and guitar and he studied jaz keyboard improvisation, which strongly influenced his writing. He performed at universities and clubs in and around Toronto in the mid seventies. Some of his material was recorded by Raffi.

Robert Armes released a few copies of this self-penned folk album 'Songs For Icarus' in 1972 in Ontario on Stony Creek ST 57293. It was recorded at 212 Studios in Peterborough, Ontario. Robert provided the guitar, vocals, harmonica and piano and was accompanied by George Bertok on piano and vocals; Jamie Crammond on guitar and vocals; Nancy Perkins on vocals. The album was engineered and produced by Phil Mathewson. The artwork was by Annie. The cover & poetry was by Jamie Crammond.

All songs were registered for copywrite by Sugarloaf Music.

Tragically Hip weren't the first band to write a song about Bobcaygeon...."You've Never Seen Fightin' in Bars Till You've Been to Bobcaygeon....The Girls Still Give Hickeys to Guys Who Won't Wear Their Hair Long"...

origins and ends
as yet unfocussed
somewhere here lie
hints of your peculiarity.

can only smile
and leave unsaid the
accolades and acclamations

on one really deserves.

For what more can
applause denote
but sacrificed derision…

incessant demands for
self-actualization
in flight

Uniform innocence
let it stand as
it assaults you…
back again .
-Jamie Cramond

Perhaps the first song written about Bobcaygeon, Ontario was recorded by Bev Marie Van den Bergh circa 1971, entitled "There's a Little Town (Bobcaygeon)" from the album "Spin It Country" on Banff SBS 5412. The song was originally written by her father, Robert Bradt, who moved to Bobcaygeon in 1922.

Robert Armes recorded 5 tracks for the CBC compilation on CBC LM 423: Every Step of the Way/ Nicotine/ Reach for the Sky/ Slippin' Away/ Can't Keep a Good Women Down. He also recorded hundreds of radio and sports tunes including Hockey Night.