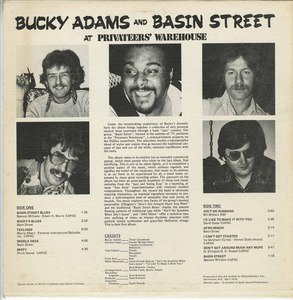 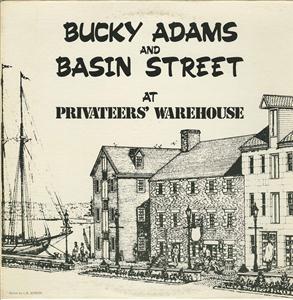 Under the breathtaking exuberance of Bucky’s dynamic horn the album brings together a collection of very personal musical ideas expressed through a basic “jazz” context. The group, “Basin Street”, formed in the summer of ’75, performed at the “Privateers Warehouse”, a restored historic property on the Halifax waterfront. The selections involve a representative blend of styles and visions that go beyond the traditional concepts of jazz and yet all the while, maintain equilibrium with the roots.

Charles R. “Bucky” Adams was born into a large musical family on in Halifax Nova Scotia in 1937. From the 50’s through to the 80’s Bucky formed several successful band, including, “The Rockin’ Rebels”, “Club Unusual”, and “The Basin Street Trio”. Bucky also played with jazz greats Louis Armstrong, Dizzie Gillespie, and Oscar Peterson, to name only a few. In 1981 Bucky was featured on the CBC Radio Halifax program “Identities”, for which he was awarded the International Gabriel Award by the United Nations, representing the highest honor in broadcasting production and content.

During the 90’s Bucky’s career has taken on a renewed energy and direction. Since 1993 he has performed with the prestigious Nova Scotia Mass choir. In 1996 Bucky produced his own CD, “In A Lovin’ Way”, and in 1997 was nominated for two East Coast Music Awards. His upcoming CD, “Fresh Daily” is a collection of live performances. Bucky’s pioneering and undaunted spirit has stood the test of time and has helped to keep jazz alive in Halifax. read more: http://www.ansma.com/artists-charlesbuckyadams.html