Charles R. "Bucky" Adams was born into a large musical family on Maynard Street in Halifax in 1937. At an early age Bucky picked up the trumpet to play alongside his father on the saxophone. At age 11 Bucky had the distinction of playing for the Queen during a royal visit to Halifax. In the years that followed Bucky played his trumpet with such intensity that it blew apart during one of his frequent performances at the Gerrish Street Hall. Determined that the "show must go on" Bucky ran home between sets and borrowed his father's instrument, returning just in time to step back on stage. This twist of fate resulted in Bucky embarking on a lifelong love affair with the tenor sax.

From the 50's through to the 80's, Bucky formed several successful bands, including "The Rockin' Rebels", "Club Unusual", "The Basin St.Trio", with whom he made his first recording, and "Generations", comprised of young players on the cutting edge of the Halifax music scene. Bucky also played with or to Jazz greats Louis Armstrong, Dizzie Gillespie, Oscar Peterson, Count Bassie, B.B.King and Lionel Hampton. In 1981 Bucky was featured on the CBC Radio Halifax program "Identities", for which he was awarded the International Gabriel Award by the United Nations, representing the highest honour in broadcasting production and content.

During the 90's Bucky's career has taken on a renewed energy and direction. Since 1991 he has volunteered for weekly performances with the Senior's Band at Northwood Manor in Halifax and since 1993 has performed with the prestigious Nova Scotia Mass Choir, with whom he has participated on two recordings. Bucky has also remained very active at East Coast concerts and Jazz Festivals which wouldn't be complete without his smooth, rich performances. In 1996 Bucky produced his own CD "In a Lovin' Way", an autobiographical collection on which he wrote or co-wrote all but one song. The Album received rave reviews upon its release in 1997 and was nominated for two East Coast Music Awards. Bucky has also been able to reactivate his longstanding commitment to mentoring youth. With the sponsorship of the Musicians Trust Fund, Bucky has so far visited 50 elementary, junior and senior high schools in the Halifax area playing and providing music history education to more than 12,000 students. In August 1998 Bucky had the honour of playing for civil rights pioneer Dr. Rosa Parks and 120 of her "Pathways to Freedom" students from across North America when Dr. Parks was in Halifax to receive an Honourary Doctorate from Mount Saint Vincent University. In November 1998 Bucky was presented with the "Pioneer" Award from the African Nova Scotia Music Association. On New Year's Eve 1998 Bucky premiered his newest group effort, the "Bucky Adams Cotton Club Swing Band", at the Lord Nelson Hotel as part of Halifax's "BigEvent" New Year's Celebration.

Bucky's innovative approach to timeless classics and knack for original compositions, along with his command of music styles including Swing, R&B, Jazz, Blues, Easy Listening and Inspiration, has expanded his audience to include a wide range of age groups and musical tastes. His upcoming CD, aptly entitled "Fresh Daily", is a collection of high energy live performances which showcases Bucky's incredible talent and versatility. "Fresh Daily" is scheduled for release in the Spring of 1999.

"....there are so few musicians that can play this way...gather them from all over North America and you could pick 'em up at the airport in a minivan...." Andrew Gillis, The Daily News, May 1998. 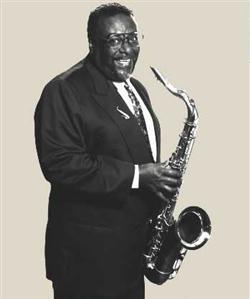