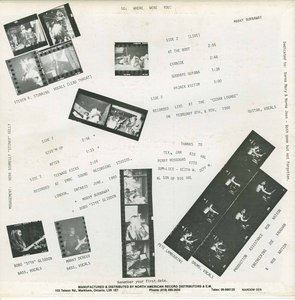 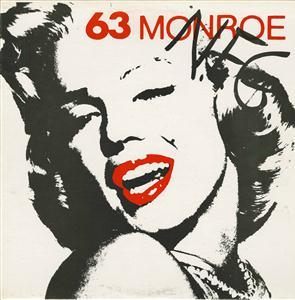 "The bastard offspring of the early punk scene in London Ontario were everywhere. Fans were forming bands that would take the music in new directions. The musicians who had already been part of the local alternative scene and those who wanted to stick around a while, were plotting their next move. Such was the case of '63 Monroe, one of London's hardest working bands. A blend of musical influences and a desire to incorporate image into their vision of a great band quickly set '63 Monroe apart from all other local bands."

Here's the skinny on '63 Monroe. The band originally started out as NFG back in late 1978, early 1979 playing mostly covers, and opening up for their hero's local giants the Demics. The man that started that band is still the driving force behind them, Steven R Stunning.

Soon they were writing and recording their own material, to date the band has officially released three vinyl albums, two singles, and two CD packages. There have been numerous compilations, as well as bootleg release's world wide.

In the 1980 the band changed its name from NFG to '63 Monroe, the name NFG just had too many negative connotations with area bar owners, it was time to usher in a new era.

'63 Monroe owned the local bar scene throughout the 80's and regularly toured Toronto and the Golden Horseshoe area. They even managed to finagle their way onto the infamous CBGB's stage in New York City and opened for the Johnny Blitz band. (former drummer with the Dead Boys) The band kick ass right into the early 90's, but the soul sucking grunge movement and the usual band member turmoil managed to put the final nail in this punk rawk juggernauts musical coffin. While various band members pondered differing career prospects, and others dabbled in musical projects for the rest of the decade, it was a 2002 reunion show that saw the band roar back to life. Reforming and headlining for a 'one off' reunion show at 'Call the Office', the band truly rawked the two-day sold-out event. The ole black magic was back, and sure enough long suffering grievances were soon forgotten. The Monroe boys were having so much fun they decided to 'keep her going' and began the arduous task of writing new material.

'63 Monroe line up consists of: