The bastard offspring of the early punk scene in London Ontario were everywhere. Fans were forming bands that would take the music in new directions. The musicians who had already been part of the local alternative scene and who were wanting to stick around a while,were plotting their next move. Such was the case of '63 Monroe, one of London's hardest working bands. A blend of musical influences and a desire to incorporate image into their vision of a great band quickly set '63 Monroe apart from all other local bands. Punk had played its original hand and '63 Monroe were ready to advance to the next round. Often described as New York Dolls meets Motorhead, their sound was a blend of classic punk, 60's garage and eventually 80's "new metal". This combination, sprinkled with individual influences brought to the table, helped '63 Monroe to achieve the near impossible...creating a sound that was uniquely theirs. No band quite sounded like them, even their cover songs came off with a Monroe flavour to it..you knew when the band had put their stamp on songs like Ace Of Spades, Kicks..even White Christmas. To some old school punks they were too metal. To the metal community (at large) they were too punk. To the average numbskull on the street, they didn't know what to make of them. To their fans they were the greatest band that ever graced a stage in London Ontario; to the rest of their admirers who understood what they were up to..the band represented a damn good night on the town. Punk tore rock and roll down to its base elements, bands like '63 Monroe helped restore a sense of fun..prevalent in their attitude,their music and their live show. They let London know that it was o.k. to rock, keep your punk ethics and idealisms, that's fine...go to their shows and expect to drink,dance and sing along. Nobody here was trying to solve the world's problems..fuck it,let's rock!

63 Monroe rose from the ashes of one of London's most notorious punk bands NFG. Pete Dekoker recalls,"NFG was one of the first punk bands in London. I have to admit I was quite influenced by them. Me and Rooster were playing in The Verge and we used to open for NFG all the time at the Cedar Lounge. Eventually NFG broke up and Marky joined The Verge for a while and then decided to form '63 Monroe."Scott Bentley (a.k.a. Steven R. Stunning) and Mark Scott (a.k.a. Marky Burnaway) came from NFG. They joined forces with Pete DeKoker and Jeff Rooth (a.k.a. Rooster) of The Verge.

The band changed their name to First Date briefly in October of 1981. They played a few shows under this name before changing back to '63 Monroe.What was noticeable at First Dates' gigs was the band clearly had decided to go with an image.Clothes had become a factor,ripped jeans and t-shirts gave way to leathers..and satins. Make up was being dabbled with and would soon be a staple with the band.The sense of style and presentation on stage would remain intact as the band switched back to the name '63 Monroe. In fact,it would increase ten fold.Being from the Alice Cooper school of rock, the guys had no problem kicking things up a few notches. Visual presentation became an integral component of the band's ideals. This was a band that intended to move forward.

The band's name derived from the obvious, that being the beginning of a new legend. It is also a statement showing the member's feelings towards the insanity,excesses and stupidity of the jet set celebrities and of their own demise. Although influences on the band had included the New York Dolls, The Ramones as well as early London bands such as the Demics, they were aware of the importance of finding their own niche. The sound was raw, but enjoyable to the punk/metal crossover generation..and for those who understood that the band was approaching alternative music from a different angle,they were a breath of fresh air. What set them apart from other bands and made their sound uniquely "Monroe" was a simple equation.. Tap into the best that rock and roll had to offer......

Stinkin' Out the Joint 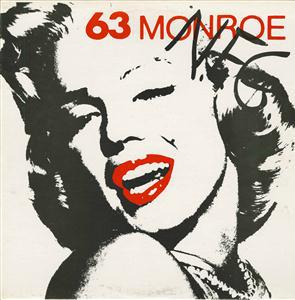