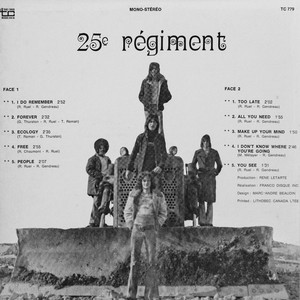 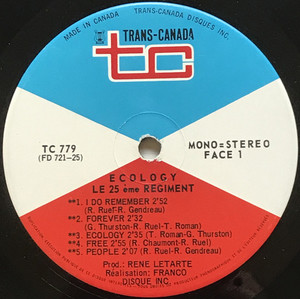 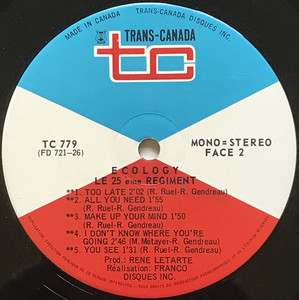 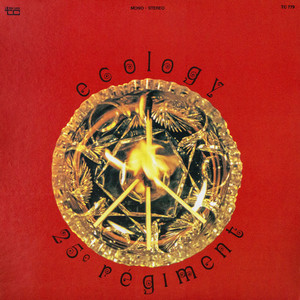 The electric shock the Beatles administered to pop music with the release of "Sgt. Pepper's Lonely Hearts Club Band" in 1967 had a major impact on most musical groups of the time. This was particularly the case with this formation from Saint-Jérôme in the Laurentians region, as much for certain borrowings from the repertoire of famous British people and the taste for a certain research as in their visual presentation at the time of its first 45 rpm, without forgetting their name which evoked in its own way the environment of the famous Sergeant. Until this moment, the young musicians had carried various names like Les Barons and les Révoltés, names which they successively abandoned as one noted their use by other musical groups. In the latter case, it is only after having engraved a 45 rpm ("Elle m'appartient", version of "Under My Thumb") that they learn about the success of a quintet from the region of Quebec under. the name of the Revolt.

After a little over a year of existence, here they are renamed Le 25e Régiment and signed with Apex, or more exactly LA Cie Compo, based in Lachine. Their first single naturally includes a version of the Beatles "Lucie under a sky of diamonds". This one is twinned with an adaptation of "My Mammy", standard of Al Jolson popularized in 1928. But it is with a title of Fireballs "Bottle Of Wine" become "It is a good sign" that they imposed on the charts at the beginning of 1968, happily sharing this success with the competing version of Chantal Renaud.

The Regiment now has in its ranks a new guitarist-singer who succeeds Guy Limoges, in the person of Karol Dicaire, until then a member of Les Astérix. We are in the summer of 1968 and the group which has the wind in its sails joins l'Agence P.G., directed by Pierre Gravel and which sees to the careers of a large number of groups, from les Topazes et les Mousses to Intrigantes and Les Sinners, including Les Gants Blancs and Les Hou-Lops. While they rush into new musical avenues of psychedelia and other underground trends on stage, their record production is moving in other directions. We can thus hear the 25th Regiment attacking a song by La Bolduc "Le petit bonhomme avec le nez pointu" or by La famille Soucy with "Les fraises et les ramboises" renamed "Les fraises à bicyclette".

The move to Tony Roman's production house, Canusa and its Revolution label, is therefore marked by a change in sound and image for the group. Visually, we notice the presence of a newcomer who will soon make his mark. For the moment Georges Thurston wears an afro hairstyle, à la Jimi Hendrix, and appears on television, Flying V guitar in hand. For the anecdote, let us point out that this one was a single model belonging to Karol, tinkered by the father of this one from a modest Silvertone and a pine board. Soon Georges became the main singer on some hits like "Venus" by the Dutch group Shocking Blue. Already we feel a greater attraction for the composition, the B side being occupied by a composition signed Dicaire and quite in tune with the times, the very pacifist "Love each other". This will also be the case of Georges who offers the whimsical "All all-dressed" and of Réjean who provides the group with its last success "Crescent Street" in 1970. These years are also marked by participation in tours such as Superswing and Musicorama.

Carried away like several other groups by the surf of the 70s, the musicians try a new approach with the concept album "Ecology" which turns out to be a commercial fiasco and will paradoxically be the joy of collectors a few decades later. Following this failure, the remaining members once again try their luck under the name S.T.P. which burns a single 45 rpm before dispersing. Most of the members, however, remain in the musical field, whether in other groups or as a solo artist, the most noted being the singer Georges Thurston, who will be identified by the surname of Boule Noire, originally the title of his first album, in 1976.