Men Without Hats formed in 1977 amid the Montreal punk scene. They became pioneers of electro-pop in Canada after adopting a New Wave sound that made extensive use of keyboard and drum synthesizers. Their sound is characterized by infectiously simple melodies, socially and politically idealistic lyrics, and the distinctive baritone voice of lead singer, principle songwriter and chief member Ivan Doroschuk. The band enjoyed phenomenal success in the 1980s with the worldwide hits “Safety Dance” and “Pop Goes the World.” Both songs were inducted into the Canadian Songwriters Hall of Fame in September 2020.

Early Years
The band — which took its name from the fact that Doroschuk and his two brothers and bandmates, Colin and Stefan, never wore hats in the frigid Montreal winters — went through numerous lineup changes before releasing the independent four-song EP Folk of the 80s (1980). Picked up by Stiff Records in Britain and the US, the EP eventually landed them a deal with Statik Records worldwide and MCA in the United States. By the time they recorded their debut album, Rhythm of Youth (1982), the band consisted of Ivan (vocals), Stefan (guitar, bass), Colin (keyboards, electronics), and Allan McCarthy (percussion, electronics).

International Success
The second single from Rhythm of Youth, “Safety Dance,” is an anthem for freedom of expression. It was based on Ivan’s confrontations with bouncers while pogo dancing in Montreal disco clubs that were not punk friendly. The song charted in the Top 10 in 20 countries, pushing worldwide sales of Rhythm of Youth to more than 2 million copies. The group received three Félix awards in 1983 — Best-Selling Single, Group of the Year and Rock Album of the Year — and another in 1984 for best-known artist outside of Quebec. They also earned Juno Award nominations in 1984 for most promising group and single of the year (“Safety Dance”), as well as a Grammy nomination for new artist.

Men Without Hats continued to receive critical acclaim but never duplicated the commercial success of their first album. The song “Where Do the Boys Go?” from Folk of the '80s (Part III) (1984) was a Top 40 hit in Canada in 1984. In 1985 they released the remixed, multilingual EP Freeways. In 1987, Lenny Pinkas (drums) joined the group and the band moved to Mercury Records. They returned to international prominence with the single “Pop Goes the World” from the album of the same name, which was certified platinum in Canada. Pop Goes the World (1987) earned the band a Félix award in 1988 for English Rock Album of the Year. The title song reached No. 2 in Canada and was a Top 20 hit on the Billboard Hot 100. In 1989, it was nominated for a Juno Award for single of the year.

1990s
The band’s next album, The Adventures of Women & Men without Hate in the 21st Century (1989), was certified gold in Canada. It included the Top 10 hit “Hey Men” and the Top 40 hit “In the 21st Century.” By then, the group had returned to a guitar-based rock style. In 1990, Ivan introduced a lineup that included Stefan, Colin, Mark Langevin, and members of the Quebec rock bands Voivod, the Doughboys, and Idées noires. The resulting album, Sideways (1991), had a dramatically different sound than the band’s previous work and was not released in the US. The group officially disbanded soon thereafter.

In 1995, McCarthy died due to complications from AIDS. The band’s greatest hits compilation, Men Without Hats: Collection, came out in 1996, without Ivan’s input. In 1997, he released The Spell, a dance album that met with modest success, and Stefan released the solo album Ride of Glory.

Reformed in 2000s
In 2003, Stefan and Ivan reformed the group and released No Hats Beyond This Point. Stefan and Colin both remained active in the Montreal music scene, while Ivan relocated to Victoria, BC, and became a stay-at-home dad. In 2005, “Safety Dance” was ranked the 36th greatest Canadian song of all time on the CBC Radio One series 50 Tracks: The Canadian Version. In 2008, “Pop Goes the World” and “Safety Dance” both received SOCAN Classics awards for achieving 100,000 airplays on domestic radio.

In 2010, citing a resurgence in the popularity of New Wave, Ivan reformed the band with session musicians and began playing at festivals. In 2011, they performed several shows with Devo and toured with The Human League and B-52s. In 2012, the band released their first album in ten years, Love in the Age of War, which marked a return to their New Wave, electro-pop sound.
-Martin Siberok, Aug 29, 2013

The Adventures Of Women & Men Without Hate In The 21st Century

The Adventures of Women & Men Without Hate in the 21st Century

No Hats Beyond This Point

I Got the Message b/w The Great Ones Remember (promo)

In the 21st Century b/w Everybody's Selling Something

I Got the Message 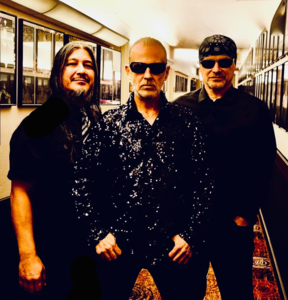