Loman, Judy
Judy (Judith Ann) Loman (b Leatherman). Harpist, teacher, b Goshen, Indiana, 3 Nov 1936; Diploma (Curtis) 1956. Judy Loman studied harp with Carlos Salzedo - at the Salzedo Harp Colony in Camden, Maine, 1947-56, and at the Curtis Institute in Philadelphia - and was his assistant in the Salzedo Harp Ensemble in 1957. She moved to Toronto in 1957 and became the principal harp of the Toronto Symphony Orchestra in 1959. Her many appearances as soloist with the TS have included performances of the John WeinzweigConcerto, which was written for her, and of Harry Somers's Suite for Harp and Chamber Orchestra, which she played with the orchestra on its 1965 European tour. The TS commissioned R. Murray Schafer'sConcerto for Harp and Orchestra for her, and premiered the work 6 Apr 1988. Loman appeared as soloist with the orchestra on its 1979 Canadian and US tour, and in 1987 on its tour to northern Canada and the Arctic. She also has appeared as soloist with the Calgary Philharmonic, the Edmonton Symphony Orchestra, and the CBC Vancouver Orchestra. She has given many recitals and has performed on CBC radio and TV, with the Festival Singers, at the Festival of the Sound, at the Elora and Stratford festivals, and with the York Winds. Robert Turner and John Felice have written works for her, and she premiered Schafer's Crown of Ariadne 5 Mar 1979 for New Music Concerts, playing both percussion and harp; her recording of the work received a Juno Award as best classical album of 1979, and the Canadian Music Council's Grand prix du disque. She gave the premieres of Schafer's Theseus 28 Jan 1986 with the Orford String Quartet, of Weinzweig's 15 Pieces for Harp in 1986, and of Glen Buhr's award-winning Tanzmusik in 1987 in Pittsburgh as part of the American Harp Society's annual composition competition. Some of Loman's own arrangements, realizations, and transcriptions of music for harp may be heard on her recordings. She became a member of the Faculty of Music, University of Toronto, in 1966 and established a summer school for harpists near Fenelon Falls, Ont, in 1977. Her pupils have included Gianetta Baril, Nora Bumanis, Sarah Davidson, Erica Goodman, and Elizabeth Volpe.

Judy Loman was married to the trumpeter Joseph Umbrico. 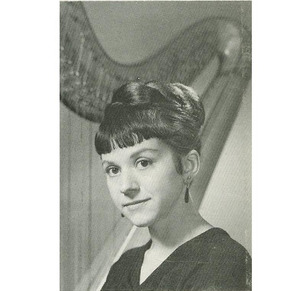