As Christine Holmes in the 1960s, Ms Sparkle had a respected solo and session standing which included a successful stint in The Family Dogg.

By the early 70’s a glam rock reinvention was thought the best way to catch the hit mood of the emerging sub-teen record market.

Cue Glitter Band-style drums, fuzz-guitars, and hand-claps all the way through her cover of The Beatles‘ Eight Days A Week (1974) – which, save for the vocals, could have been a Gary Glitter release.

Her debut album, Image (1974), contained glam remakes of girl group chestnuts including It’s in His Kiss and Baby, I Love You.

Her 1975 single, King Of The Kops, was a tribute to TV tough guy Kojak (as played by Telly Savalas) and contained the lyrics, “I’ve had a crush on you since the day I saw you on TV/and though you’re twice my age you’ve awoken all my sexuality/you shaved off your hair and you’re a little overweight…”

But her real career low-point came with her glammed-up version of Hokey Cokey (1974).

The B-side of her single Pussycat Tiger (1976) was her version of a song she co-wrote with Terry Britten, Devil Woman, which was a huge hit for Cliff Richard in 1976.

Christine Holmes began her career in show business while she was still at school. In the early sixties she sang with The Downbeats and The Applejacks before pursuing a solo career, making her first record when she was seventeen. More records followed.

Christine also appeared in a series of Dickie Valentine shows and did a season of cabaret in London. In the autumn of 1965, she made her first stage appearance in London's West End when she was given the part of Charlie in the Anna Neagle/Joe Brown musical "Charlie Girl". She then landed a regular role in the popular BBC television children's variety programme Crackerjack! (1955).

In the late sixties Christine sang with group The Family Dogg, before leaving to continue her solo career under the name Kristine Sparkle. She later turned to song writing and became an impressionist, appearing regularly in the television series Who Do You Do (1972).
-imdb 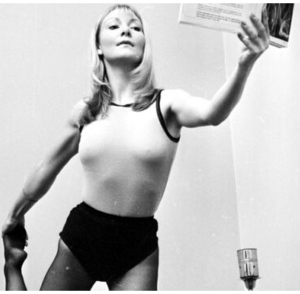