Poised between Toronto and Winnipeg, Thunder Bay, Ontario became the unfortunate refuge for every touring band in Canada; that mandatory break while crossing the perilously vast Canadian Shield. With a nine-hour drive to anywhere else, Thunder Bay’s isolation goes beyond the cold, Northwestern psyche. It permeates the Canadian consciousness, leaving its mark on every musician crossing the Bay’s threshold.

No doubt, Canada’s vastness can be heard in much of the Northernly musical output. There is perhaps no better example of this than Thunder Bay’s Jarvis Street Revue. Their lone LP from 1971 leaves no on untouched by the band’s sheer avalanche of psychedelic heaviness, wasted acid leads and harrowing, disparate vocals. Every song is laced with a convection born from the physical landscape they called home.

JSR played the Spike Coffeehouse on three different occasions between 1970-1971, and recorded the largest total audience the place ever had with 445 people. The band’s first gig was at the Lakeview Lodge. After this, they moved to Hodder Tavern where Cruickshank left the band. He was replaced by Smokey Wickman. JSR would again move, this time to the Circle Inn. Faulconer left the band next, and was replaced by Terry Stiles. Horricks eventually left the band, and at this time, the group reorganized and renamed themselves the Rock N Roll Revue. In the fall of 1999, the Jarvis Street Revue reunited, 27 years after Cruickshank left the band. Larry Breiland, who had played with Horricks in Dubai and India, was added to the band.
-bandwiki.ca 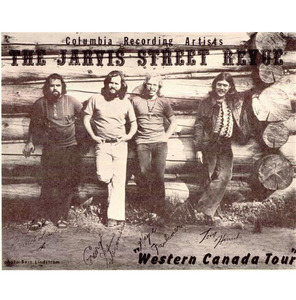