At 5'3, Pat Hervey could belt out a tune with a similar style to Brenda Lee and was one of Canada's successful early female singers of the '60s.

Pat grew up in Toronto, first singing in public when she was 9 in a high school choir and with a girlfriend who played guitar at social dances and parties. Toronto DJ Al Boliska heard her at an amateur Rock & Roll show and put her in touch with CBC Television. The network signed her and she appeared regularly on their "Club 6", "Country Hoedown", "Music Hop", "Parade", "While We're Young", and "Holiday Ranch" other shows.

Art Snider was musical director for another TV production "Club Six", and suggested she make some recordings for his Chateau label. In the Summer of 1962 she had her first hit with "Mr. Heartache". Snider held the sessions in Nashville & Chet Atkins produced 4 tracks for her, resulting in Pat being signed by RCA Victor Canada. Atkins produced her entire first LP but it didn't contain her hit songs. "Tears Of Misery" stayed on the charts for nearly 3 months, followed by "Walking In Bonnie's Footsteps". She later became the featured singer on the Tommy Hunter Show (a popular country / variety show in Canada for many years). She won a Top Country Female Award in 1964 then made a move to Stan Klees' Red Leaf label.

Nothing seemed to make an impression on the new label, and she moved to Vancouver in 1969 and "retired" from the music business, aged 22. This proved to be a short hiatus. She had her own Summer television show in 1970 and recorded another album Peaceful in 1971 on the CBC/RCA Camden label.

She married renowned Canadian jazz guitarist Oliver Gannon and resided in British Columbia, where they had a 4 piece group and perform as The Oliver Gannon/Patty Hervey Quartet. She focused her career on jazz, singing and playing bass in Vancouver's best jazz venues, proving to be a vocalist & musician capable of any genre and creating a lifetime of great music.

Tears of Misery b/w Brother Can You Spare A Dime

Where You Lead b/w Bidin' My Time

It's Love That Counts b/w Walkin' In Bonnie's Footsteps

Tears of Misery b/w Brother Can You Spare A Dime

A Mother's Love b/w I Wouldn't Blame You

Where You Lead b/w Bidin' My Time 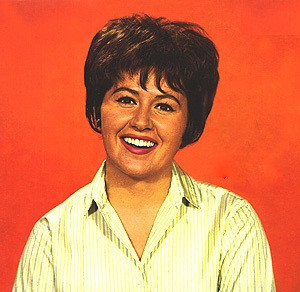